CHINA Film projectionist keeps the show on the road

Film projectionist keeps the show on the road 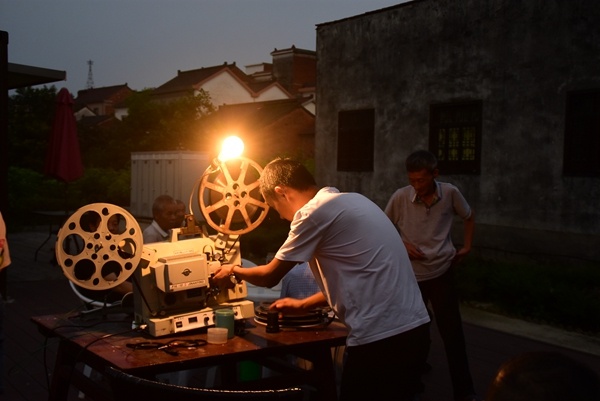 Countryside film projectionists like Liu Liang in Maming village, Zhejiang province, are responsible for bringing a major form of entertainment to their fellow villagers. (Photo: Xinhua)

Before the day is even over, residents in Wantang village eagerly wait for night to fall. That is when Liu Liang's mobile cinema opens and begins screening movies.

At a time when China's urban cinemas are still preparing to reopen, this "outdoor cinema" in Shaoyang county, central Hunan province, comes to life as villagers place their stools in front of the improvised screen.

Having been a rural projectionist for 39 years, Liu is familiar with all the procedures: Before the screening, he will debug the generator and the projector, set up the curtain and stereo system, then align the seats.

"From the first day of work, I made a promise that I would try my best to bring movies to more people," says the 58-year-old projectionist.

As a teenager, Liu was a movie aficionado who once ran 8 kilometers along a mountain road to watch a movie. After graduating from high school, he successfully landed a job as a movie projectionist in his town.

Around 1980, villages and towns across China established film teams, each equipped with two or three projectionists and tasked to promote culture and agricultural science among the rural population. There were no cinemas in many villages, so Liu toured the local area screening movies.

"At the beginning, we carried a generator, projector and films, weighing over 100 kilograms in total. We carried them all on our shoulders, sometimes walking more than 15 km on mountain roads to screen a movie," Liu says.

He later bought a bicycle and tied two bags to the back seat to carry the equipment. Over the years three bicycles were broken in the process.

Back then, watching movies was the most entertaining event in those mountain villages. Village administrations and sometimes wealthier families bore the cost so the movies would be free of charge for viewers. Whenever Liu arrived at a village, he would be welcomed by villagers already waiting in the open space where the screening would take place.

In the late 1990s, TV sets and DVDs became popular in rural China as living standards improved. As more and more villagers chose to watch movies in their own homes, the market for movie screening plummeted.

Back then, only one or two movies were shown over a few months, with only a few people in attendance. After five of his colleagues resigned, Liu became the only projectionist in town and had to moonlight in the post office to subsidize his family.

At a time when more and more Chinese films appeared at international film festivals, Liu met his biggest career setback. Hoping to attract bigger audiences with fancy new facilities, he spent all his savings to buy a digital projector only to be swindled into buying a shoddy product.

Liu cried after selling the projector as scrap metal. "I thought my movie dream was over, but I couldn't give up, or the 'spiritual garden' of countryside movies would disappear."

In recent years, watching movies as a collective pastime has seen a revival in many villages. In 2007, the Chinese government issued a policy to support film screening in rural areas. It demanded at least one free screening per month in a village, which would be subsidized by the government.

Spurred by the new policy, Liu quit his post-office job and, together with his wife, contracted film screening in 36 villages in the town. He now drives a van to stage over 350 screenings a year, aided by digital projectors distributed by the government.

"At present, the main audience in the countryside are left-behind children and the elderly, so I bring them action movies, comedies and movies of traditional Chinese operas," Liu says, adding he would adjust screening lists to the tastes of the audience.

In 2018, as a representative of rural projectionists, Liu attended the 17th China Huabiao Film Awards, where he finally had a chance to meet movie stars like Jackie Chan, Wu Jing and Zhang Ziyi.

After returning from the ceremony, Liu says he quickly picked up the village tours and his movie screening job.

"Thirty-nine years have passed, and the whole town is used to having me play movies, and villagers have enjoyed watching my movies. I am very satisfied," says the longtime projectionist.

"Movies filled the entertainment void in my childhood, and now as we live a better material life, movies are there to enrich our spiritual world."