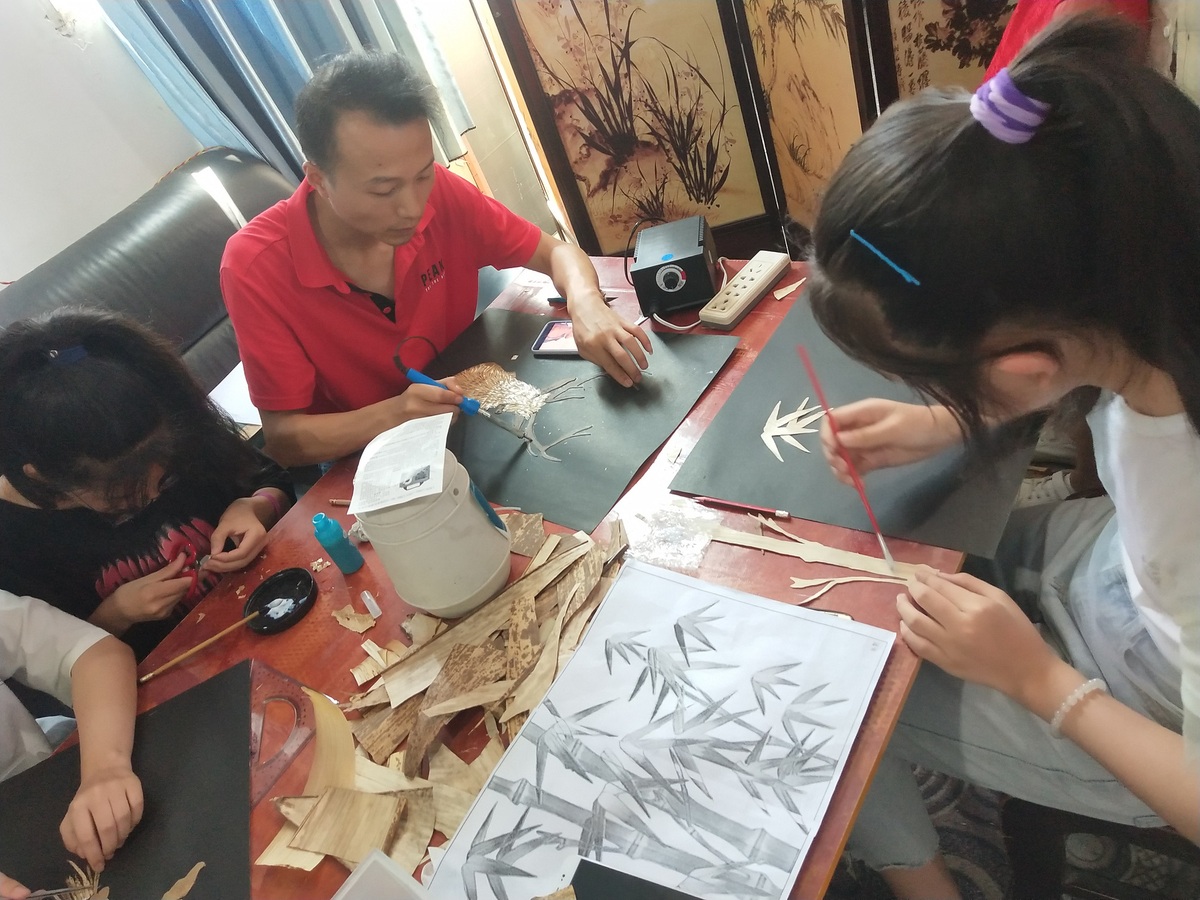 Li Sifei was born and raised in a local village in Fuling. After graduating from a normal technical secondary school in 2003, he started teaching art at Zengfu Town Middle School.

"I felt a call of duty to teach here," Li said, noting that art education is lacking for rural kids.

For years, he had been thinking of utilizing free and interesting raw materials for his students, who are mostly from poor families. In 2017, while taking a walk beside a local river, he spotted a large amount of bamboo husks — the paper-like outer skin of the plant that is usually discarded after the center is removed for food.

"These can be really artistically expressive if used as a canvas for painting," he said.

Li began to learn the art from Xie Fansheng, a 32nd generation inheritor of bamboo mosaic painting from Nanping, Fujian province, and soon started to teach the skills to his students.

He said the most difficult part is to layer the thin, rough bamboo husks. He guides students in their aesthetic appreciation and drawing technique — including how, step by step, to prepare a base structure with husks, which come in different shapes and sizes.

As more students showed interest in Li's class, a bamboo painting association of nearly 40 students was established. Li said the children like to make images related to their everyday lives on the bamboo, such as the local grand bridge, fig trees (Ficus virens), cattle and fields, and houses with tile roofs,.

Li's hard work finally paid off. Recently, with the support of local authorities, a special exhibition of about 80 bamboo husk paintings by Li and his students opened at the local art museum. It will run until Oct 23.

"The first time I visited an art gallery was to see my own work," said 14-year-old Xiong Jie, one of Li's students, who could hardly contain his excitement.

Li himself has been upgrading his own professional credentials. He obtained bachelor's degrees in fine arts education at both Southwest University and the Sichuan Fine Arts Institute, and he has become one of Xie's inheritors.

Last year, two of his works — The Red Boat and The Mother Weaving the Bamboo Basket — were exhibited at the first Chongqing Fine Arts and Crafts Exhibition.

"Bamboo husk painting is not an eye-catching gimmick but a real art and craft," said Li, adding that he will continue to teach and bring his students onto a broader stage.

"I hope the light of art will build their confidence and enrich their lives," he said.