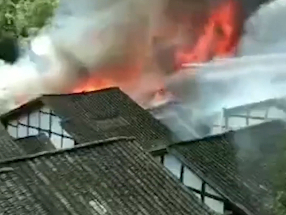 Photo: Screenshot from a news video on social media

The fire started around 11:35 a.m. in Jiangjin District. Video footage taken at the site showed fire ripping through wooden structures by the streets of the ancient town.

The local publicity department said firefighters have been sent to the site and people are being evacuated. So far, no casualties have been reported.

Zhongshan ancient town has a history of over 800 years. It is a national 4A scenic spot, the second-highest in China's tourist attraction rating system.