Firebombings a 'menace' to HK judiciary 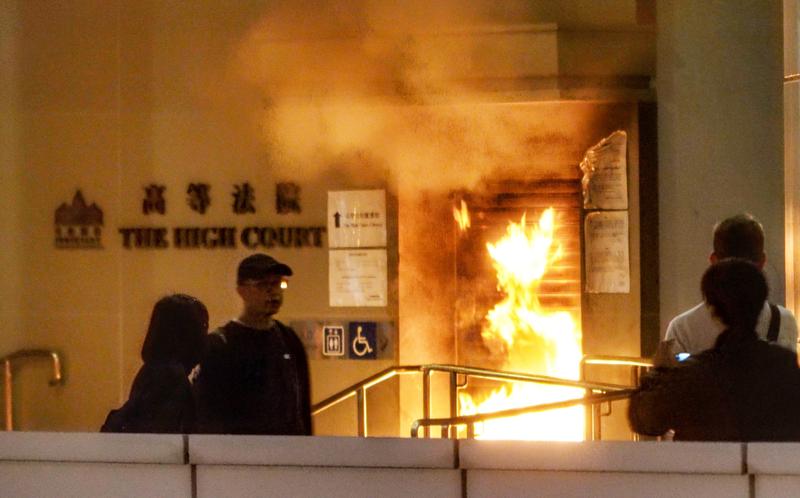 Fire erupts at the entrance of the High Court Building on Sunday evening after rioters firebombed the courthouse. (Photo: China Daily)

Gasoline bomb attacks on the gates of the High Court and the Court of Final Appeal buildings on Sunday represent a menace to Hong Kong's judiciary, local legal experts said on Monday.

Their remarks followed the attacks in which radicals, unable to reach the court buildings, set fires at their gates after a largely peaceful march on Sunday.

The number of radical protesters involved in the firebombings was still under investigation, authorities said. The exterior walls of the judicial compounds also were spray-painted with graffiti.

These acts constitute a "blatant menace" for Hong Kong's judicial system, said barrister Lawrence Ma Yan-kwok. Ma said the radicals appear to be attempting to threaten judges so they will give lenient sentences to those arrested and convicted during the six months of unrest in the special administrative region, which was sparked by a now-withdrawn extradition amendment bill.

As of Monday, police had arrested 6,022 people since anti-government protests gripped the city in June. Of those, 956 have been charged with crimes such as rioting, possession of offensive weapons and unlawful assembly.

The Department of Justice and the courts have become a target as those cases have advanced and an increasing number have been charged and sentenced, Ma said. The concern is that the judges themselves may become targets for harassment, said Ma, also chairman of the Hong Kong Legal Exchange Foundation, a platform for exchanges between lawyers in Hong Kong, Australia and elsewhere.

"I'm afraid that this is a message sent to the judiciary," said Willy Fu Kin-chi, a law lecturer at Shue Yan University, "with the intention of coercing judges with physical threats to let rioters off."

Fu said, however, that the deterrent effect of punishment is undermined when those found guilty of breaking the law get off lightly. Hong Kong's government is responsible for boosting legal education, including telling young people of the consequences of breaking the law. Fu also is the secretary-general of the legal exchange foundation.

Ronny Tong Ka-wah, a member of the SAR's Executive Council and a barrister, said those who spray-painted "the rule of law is dead" on judicial compound walls are not only using an illegal means of expression but also conveying an "unreasonable" message.

The rule of law is not dead, he said, when courts rule impartially on those accused of criminal acts. Instead, that is a validation of the rule of law, Tong said. He said he is confident the judiciary will continue to issue legal rulings in a professional and fair manner.