Firefighters from across nation come to the rescue after reservoir discharges 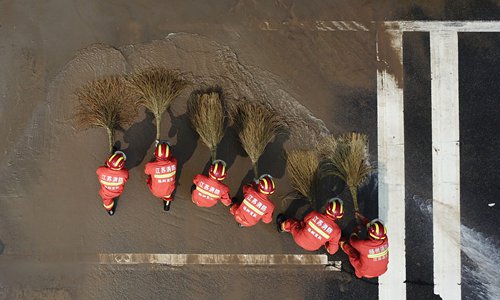 The national highway G308 across Shouguang in East China's Shandong Province looks unusually desolate after the area was recently hit by the most severe flooding in over 40 years. The road, commonly used to transport the city's vegetables, is now blocked off to allow villagers to lay out and dry their crops.

A few days after Typhoon Rumbia hit the city of Shouguang - China's top vegetable hub - local villagers are still suffering from the flooding, both financially and psychologically.

Days of incessant flooding had already inundated many farms across city, due to the overflowing Mihe River.

The floods forced the relocation of hundreds of thousands of people and caused at least 9.2 billion yuan ($1.3 billion) in property damage.

Water has faded in most of the disaster areas after widespread flooding, but fear of massive damage is growing, especially among crop growers.

In a house in one of the villages in Shouguang, a trace of the receding water line, about 1.5 meters high, is still visible on the walls. The yard is filled with piles of discarded appliances and bedding, waiting to be cleared by firefighters.

In just a matter of hours, towns were swept away. Now farmers in Shouguang are contemplating how to rebuild their lives.

Walking into Meng village of Jitai county, thin rotten eggplants are scattered along the muddy road. Water is like a swimming pool - almost 3 meters deep - in the lowlands of the village.

Jitai is located in a low-lying area. This means most flooding around Jitai eventually enters the town.

The villagers told the Global Times that eggplant is the main source of livelihood for most people in the village. Heavy rain and flooding prevented many farmers in the village from getting crops in the ground.

It is believed that damaged peppers, cucumbers, melons and tomatoes widely grown in the village will go unharvested, leaving the farmers without a whole year's income.

The roots of most crops have become necrotic after a long soaking. "The longer the water erodes the crops, the less possible it is to see their recovery," a villager said. "It is absolutely demoralizing to see it."

But what made them more anxious is the collapse of the vegetable greenhouses.

Floodwater was still half a meter from the top of the vegetable greenhouses on Tuesday.

"It will cost 100,000 to 200,000 yuan for every family to rebuild their greenhouses. This amount of money is enough to build a new house in the village. This is on top of the loss of crops that were already planted and future losses," a villager told the Global Times.

He said that he would rather have his own house collapse than a vegetable greenhouse, which is the foundation of his income.

The city's emergency relief command has sent firefighters into the villages to help with drainage.

A seedling vendor told reporters that many vegetable seeds are also in short supply, and many villagers are pinning their hopes on planting in less affected areas, hoping to dry the soil as soon as possible so as to seize a "last chance" of reseeding.

"[They are] about to miss the season, and many villagers have come to me to beg for seeds, while at the same time burning incense to beg for the water to recede," the vendor said.

A bigger loss is faced by the pig processor Li Jingzong, who owns the largest sow breeding operation in his village, Kouzi, north of Shouguang.

He said that all of his 6,000 adult pigs were drowned, with direct economic losses estimated at more than 7 million yuan.

He had no time to lament his misery when he first heard about the accident, but rather urgently hired more than 30 workers to help clean up the drowned pigs to prevent the spread of disease.

Wang Xia, one of the workers, told the Global Times that they were up all night to clean up the dead pigs in the first two days. Even with a respirator and gloves, it was still hard to escape the stench that fills the air in the heat of summer.

By now, about 25,000 pigs that died in Kouzi village have been buried in accordance with national standards. At the same time, all breeding areas have been sprayed with pesticides every day.

Compared to vegetable farmers and poultry owners, who can possibly rely on crop insurance and hopefully get some kind of disaster assistance from the government, salt miners may face irreparable losses.

This is the second time that Xiao Liangxian, a nearly 50-year-old peasant of Dingjiazhuangzi village, Yangkou town, has seen his carefully run salt mine destroyed by flooding. It first happened during heavy rains in 2013.

Xiao has rented more than 135 acres of salt fields. He fears huge financial losses now as around 80 percent of his salt operation has been washed out completely. At the current market price of 150 yuan per ton, his loss of more than 3,000 tons of salt is worth at least 450,000 yuan.

Xiao told the Global Times that the salt price this year reached the highest level in the past five years. He was waiting for the peak prices that usually come in autumn to sell his salt in order to pay for his son's school fees, but never expected that a flood would wash away all his hopes.

Repairs to his damaged salt ponds are conservatively estimated at around 750,000 yuan, he said, and it would take at least three years of income to recover the losses.

Due to the lack of available insurance coverage, his salt field is not covered.

"When it used to rain, we would pull a black plastic sheet over the salt pond to protect it.

But this time it was too late to put into place any safeguard procedures and there was not enough time to protect the salt field before my evacuation," he said. "If I had been informed earlier, I wouldn't have suffered such a heavy loss."

I the first seven days after the flood, before the firefighter reinforcements arrived, villagers across the region struggled to take the initiative to save themselves by pumping out their greenhouses and trying to rescue any livestock left stranded by the flood.

Villagers in Jitai dug trenches lined with plastic around their vegetable greenhouses. They pumped water out of their greenhouses into the reservoir using professional equipment.

The G308 highway divides Jitai into two separate villages. According to local people, the two villages were close to each other before the flood. But the sudden deluge broke their bonds. Both sides were eager to divert the water from their vegetable gardens to the opposite side of the highway, causing roadside friction.

"Squabbles came mainly from the deep concern and panic of villagers. After all, our ability to help ourselves is limited, and it is certainly not enough to drain the water based only on our own strength," villager Li Tong from Dingjiayaohe village told the Global Times.

More than 10,000 firefighters arrived to assist in rescue efforts in Shouguang as of Monday morning.

Firefighters from across the country assisted villagers in Shouguang in clearing up scattered rubbish from the recent floods.

The villagers in the worst-hit areas have not yet fully returned home. Most houses in Nanzhaike were built in 1980s. They face the risk of collapse after the flood. Villagers hope to return to their houses soon if conditions are suitable.