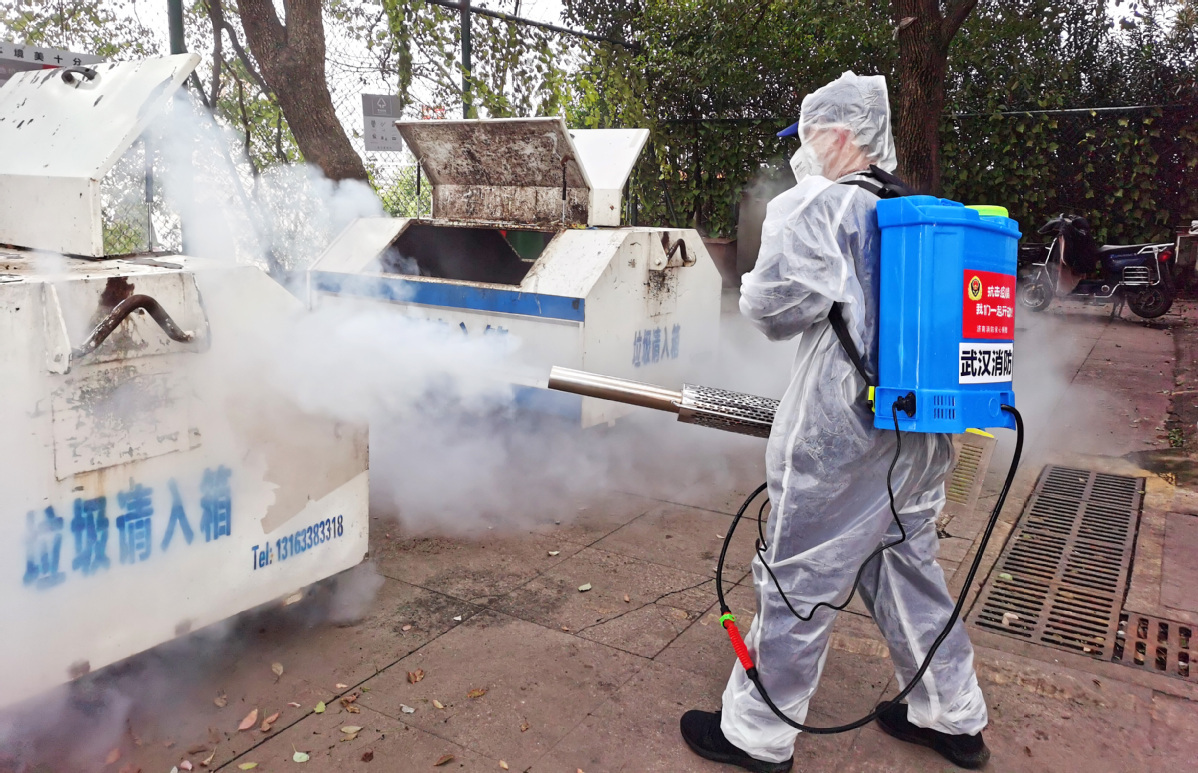 A firefighter disinfects waste bins outside a hotel in Wuhan, Hubei province, that housed medical workers earlier this month. [Photo/XINHUA]

Even though the suspension of business operations in Hubei province－the epicenter of the novel coronavirus outbreak－has reduced accident risks, firefighters in the province have been busier than ever.

Aside from regular fire control and rescue work, Hubei firefighters have been braving dangers they have never encountered before as they devote themselves to the battle against the novel coronavirus pneumonia epidemic.

"Like most of my colleagues, I have not gone back home since Jan 23," said Du Qiang, head of a fire control station in the Jiang'an district of Wuhan, Hubei's provincial capital.

In a phone interview on March 2, the veteran firefighter apologized for constant interruptions from his colleagues, who had just sent a group of recovered patients to a designated quarantine zone and were in communication before hurrying to another transfer task.

Patients discharged from hospitals in Wuhan need to be quarantined for 14 days in case their nucleic acid tests give false negative results.

Du, 34, said he couldn't remember how many patients he had transferred, but his memory of the first time he transferred people suspected of being infected to a hospital for tests on Feb 29 remained fresh, especially when he was asked to sign a list naming the 27 patients he was going to transfer.

"It's difficult to describe my feeling when I wrote down my name. I was excited because I thought I was contributing to the fight against the epidemic. But I was also nervous," he said, despite having received self-protection training from the head of a makeshift hospital.

Part of the nervousness was due to the responsibility he shouldered for the patients' safety, but he said he also needed to ensure his own safety so he would not be infected with the virus and "negatively affect my team and my family".

In addition to transferring patients, Du has been contributing to the construction of makeshift hospitals and the installation of firefighting devices in them for over a month, while also helping people solve problems emerging from the fight against the virus.

Many people, for example, have been unable to re-enter their homes after returning from quarantine or treatment as they don't have the keys and the family members who hold them are still under isolation or being treated. Du and his colleagues have often been called to help open doors.

It's not unusual for the team to work deep into the night. When helping a makeshift hospital build wastewater disposal facilities, for example, Du and his colleagues were asked to use their firefighting trucks to fill 22 water tanks so the tanks would withstand the pressure when they were buried underground.

"We started at around 3 pm and injected a total of 500 metric tons of water into the tanks. The work lasted till the small hours of the second day," he said.

Du is one of 950 firefighters in a dedicated Party member team for patient transfer and disinfection tasks in Wuhan. While 650 of the firefighters are from local fire rescue teams, the others are firefighters who were stranded in Hubei when it was locked down because of the epidemic after returning home for Spring Festival, according to the Ministry of Emergency Management.

Du's colleagues in Hubei are ready round-the-clock to respond to people who turn to the 119 fire emergency hotline for help to address troubles caused by the epidemic, the ministry said.

As part of efforts to prevent transmission of the virus, authorities in many areas in Hubei put a halt to nearly all transportation and movement, except for epidemic control efforts and service vehicles, leaving some people unable to return home. They could call 119 for help, the ministry said in a media release.

A man from Xiangyang called 119 on Feb 25, asking firefighters to help get his pregnant wife, who was stranded in her parents' rural home, back to the urban area for a pregnancy check.

"My wife had a spontaneous abortion when she was pregnant the last time," he said. "The doctor repeatedly advised her to go for pregnancy checks regularly this time."

After getting confirmation from the local epidemic prevention and control headquarters that the healthy woman could leave, local firefighters not only got the woman back to the urban area but also sent her to the hospital for the checkup, her husband said.

Since the outbreak began, firefighters in Hubei had accepted 5,719 tasks related to the epidemic by Friday. Aside from transferring 5,742 patients, they had also helped disinfect an area of more than 10 million square meters and transported 15,000 tons of epidemic control materials, the ministry said.