Firefighters put out fire through window after house door locked 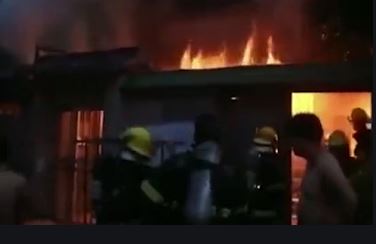 Firefighters managed to put out a house fire in the city of Bengbu in Anhui Province by spraying water in through a window, after the occupant ran outside and accidentally locked the door behind her.

The woman had accidentally left a gas stove on after frying some chicken. The oil overheated and burst into flames. She tried to put the fire out by throwing water on the burning oil, but that caused the fire to spread, so she grabbed her two children and ran out of the house.

In her rush to leave, she left her house keys behind, so when firefighters arrived at the scene, they tried to get the fire under control by spraying water in through the window. They eventually broke down the door to the house and put the fire out.