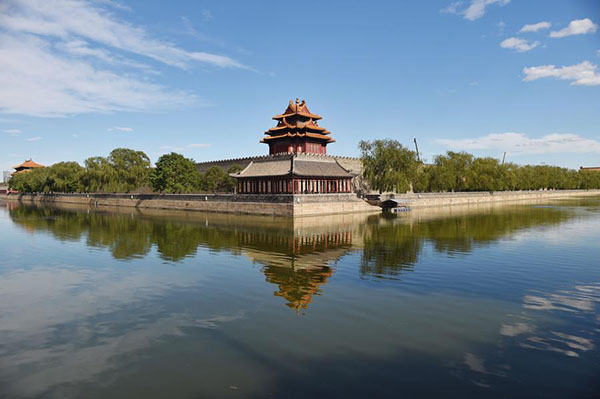 A turret of the Forbidden City under blue sky in Beijing in this photo taken on July 12, 2015. (Photo/Xinhua)

People who believe fireworks are an essential part of the Spring Festival celebration have found it more challenging to get them or find a location to set them off in major Chinese cities this year. That is because more regions have imposed harsher bans or restrictions on fireworks for reasons of safety and environmental protection.

Aside from big metropolises like Beijing and Shanghai, more cities like Tianjin and Nanjing have begun to impose or expand restrictions during this year's Spring Festival.

Some may miss the days when city skylines burst into multicolored light on midnight of Lunar New Year's Eve after families got together to set off fireworks to ward off the New Year's legendary monster. But many are happy that they aren't forced to endure the poor air quality caused by fireworks and can sleep better without the explosions of fireworks that were sometimes likened to the sounds of a war zone.

The overall air quality of 338 cities across the country on Lunar New Year's Eve and Spring Festival day improved this year, according to the Ministry of Ecology and Environment. The cities' peak hourly average concentration of PM2.5-the dangerous particulate matter with a diameter of less than 2.5 micrometers-dropped by 14.2 percent year-on-year, and fell by 32.9 percent compared with the average figure of the past three years.

During the peak time for pollution, which normally occurs around 3 am on the first day of the Lunar New Year because of fireworks, the number of heavily polluted cities fell by 12 this year compared with last Spring Festival, the ministry said, attributing the improvement to stricter management of fireworks.

Beijing's level of PM2.5 peaked at 177 micrograms per cubic meter between 7 pm on Monday and 6 am on Tuesday, a drop of 38.3 percent compared with the same period last year. The city briefly experienced heavy pollution, between 3 and 5 am on Tuesday, a significantly shorter span than during the past three Spring Festivals, the ministry said.

Zhang Wei, who opened a retail fireworks outlet in the city's Shunyi district on Jan 30, said the capital has fewer fireworks stores this year.

"The 300 boxes of fireworks that I stocked were flying off the shelves pretty fast because they were fewer outlets than last year," said Zhang, who has been selling fireworks in Beijing during the Spring Festival season for eight years.

The number of such temporary outlets in the city has been cut to 37 from more than 80 in 2018 and they are all located outside the Fifth Ring Road. Also, no outlets were allowed in Beijing's subcenter in Tongzhou district. This year, 40,000 boxes of fireworks were ordered for the Beijing market, a drop of more than 46.7 percent year-on-year, according to the Beijing Emergency Management Bureau.

The city also expanded the fireworks-free zone during Spring Festival holiday this year by 18.6 percent from 2018, when Beijing revised local regulations on fireworks and firecrackers and banned setting them off in central areas.

"We aren't allowed to sell fireworks that can shoot up into the sky or larger firecrackers starting this year. Also, people need to bring their ID cards to buy them," Zhang said.