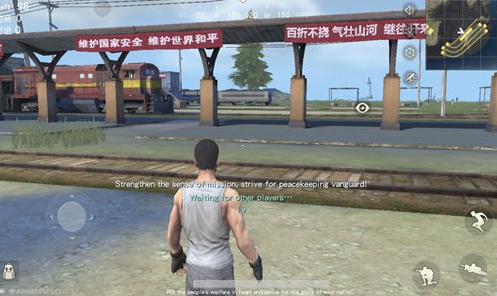 The developers of a popular action game on smartphones have modified the game after regulators recommended that violent games on smartphones be banned from the Chinese market.  Wildness Action, the mobile game released by NetEase Games in October, recently topped the free games in the Chinese mainland's Apple Store, but changed violent elements into "harmonious" ones with Chinese characteristics.The Global Times on Tuesday found red banners with slogans such as "safeguard national security, safeguard world peace" popping up frequently in the game.The slogans also include excerpts from the report delivered at the 19th National Congress of the Communist Party of China that reflects China's core values. The slogans are written in Chinese, and the game comes in English and Japanese versions.The smartphone game is a Chinese imitation of the popular action game Playerunknown's Battlegrounds, in which players kill each other and the last man standing wins.Deathmatch is Wildness Action's default setting, but changes have been made to alter the scene to a peacekeeping drill, in which each player is a colleague."I do not want to 'kill' colleagues. It makes the game less fun," said Qiu Peng, a player of both games. However, Qiu noted that Playerunknown's Battlegrounds promotes violence, so the changes in Wildness Action might help."The changes could help guide the values of the players, especially underage ones," a Sina Weibo user commented.Several other Chinese game developers have not modified their similar violent mobile games.According to a notice on Wildness Action's website, China's official regulator has been monitoring such games.NetEase complies with instructions from national administrative departments to modify such games, ensuring that the games reflect socialist core values, the notice said.