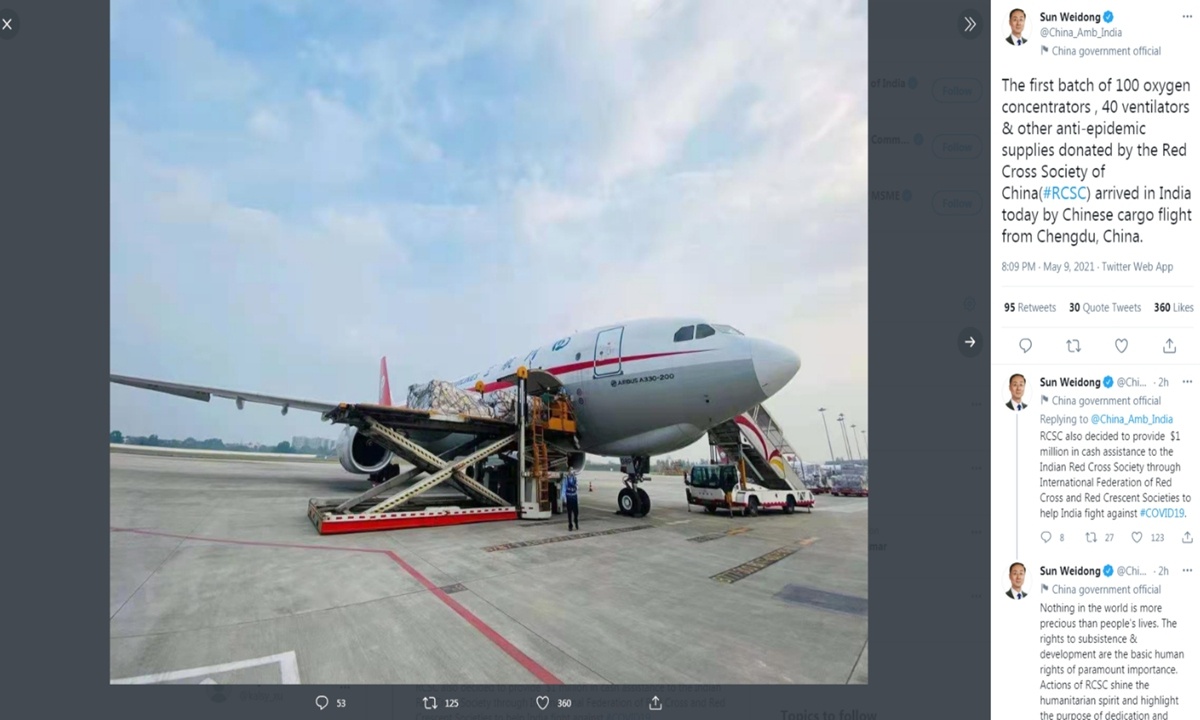 Photo: screenshot of a tweet by Chinese Ambassador to India Sun Weidong

The first batch of donated anti-epidemic supplies from China reached India on Sunday, Chinese Ambassador to India Sun Weidong said, as India was in urgent need of the materials to cope with the surge in new COVID-19 cases and deaths.

As humanitarian support to India, the Red Cross Society of China (RCSC) donated the first batch of 100 oxygen concentrators, 40 ventilators and other anti-epidemic supplies, according to Sun.

The donations by the RCSC arrived in India on Sunday on a Chinese cargo flight, Ambassador Sun said, adding that the RCSC also decided to provide $1 million in cash to the Indian Red Cross Society to help India fight against COVI-19.

India reported more than 400,000 new COVID-19 cases and 4,187 deaths, bringing the total number of cases to 22 million and the death tally to 242,362, the latest official data showed, although some experts said that these numbers were exponentially lower than the reality.

The surge may continue and India could become a "viral petri dish," Zheng Zhijie, head of global public health at the School of Public Health, Peking University, told the Chinese media.

"The epidemic will continue for a period of time because India has yet to implement strict public health measures to wipe out the epidemic. New policies on COVID-19 testing will also add to the number of new cases," Zheng said.

The deadly outbreak and skyrocketing death toll in India were caused by B.1.617, a dreaded variant of COVID-19 widely identified as a double mutation that was unique to several Indian states. It has reached about 20 countries.

Zheng continued: "I'm really worried that India could become a new viral petri dish because this double mutation variant is stronger in infectivity and higher in terms of the fatality rate. We're wondering whether new variants could show up as the epidemic continues to spread."

It is a natural rule that a virus will always mutate if a pandemic isn't curbed, Wu Zunyou, chief epidemiologist at the Chinese Center for Disease Control and Prevention (CDC) told the Chinese media.

But no matter how a virus mutates, an epidemic should be contained if effective anti-epidemic measures are imposed, Wu said, adding that curbing the epidemic by adopting strict anti-epidemic policies is the most effective way to reduce or prevent virus mutations.

Yang Zhanqiu, deputy director of the pathogen biology department at Wuhan University, told the Global Times on Sunday that virus could develop a genetic mutation, genetic deletion or genetic recombination at a quick speed, if India continues to let it rip.

A Global Times reporter in India learned that since February 14, the Indian government adopted a slew of measures to contain the virus' spread, including imposing curfews, partial lockdowns, and travel restrictions, but those rules turned out to be ineffective.

The Indian government has yet to impose a national lockdown but a dozen states have imposed total shutdowns, the Global Times reporter in India learned. Many members of the Indian public cannot wear masks properly in hot weather.

China, a close neighbor of India, has reported several imported cases from India, triggering the public to wonder if the imported cases would result in further domestic infections. Chinese academician Li Lanjuan said the country should be safe from India's prevalent epidemic due to strong anti-epidemic policies in border districts, but warned that China should not let down its guard.

To make sure of the wellbeing of Chinese nationals in India, roughly 1,000 people, the Chinese Embassy in India released a long and detailed booklet in Chinese, based on the advice of leading Chinese experts, on Sunday to help them out.

If Chinese nationals are infected and cannot be treated in a hospital due to the medical system breakdown in India, the Embassy recommended that they take traditional Chinese medicine to relieve their COVID-19 symptoms, as well as antibiotics if necessary. The Embassy also encouraged Chinese to receive vaccines to generate an immune barrier, either Chinese or Indian vaccines.