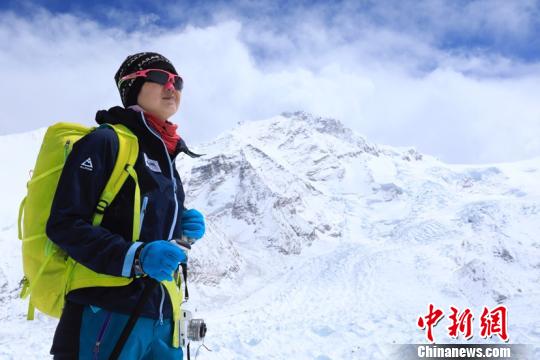 Luo Jing, 43, ascended to Shishapangma Peak on Saturday morning, making her the first Chinese woman to successfully crest all 14 8,000-meter-plus mountains in the world, the paper.com.cn reported.

Shishapangma is the 14th highest mountain in the world at 8,027 meters (26,335 ft) above the sea level and composes the eight-thousanders 14 mountains on Earth that are more than 8,000 meters (26,247 ft) high above sea level together with the other 13 taller mountains.

It is a rare accomplishment as the number of people who have achieved the feat worldwide is under 40.

It took Luo about eight years to complete the remarkable feat as she reached the peak of the last remaining one in the list of 8,000-meter-plus mountains at around 8:30 am on Sept 29.

Her first ascent of the 8,000-meter-plus mountain, to climb Mount Manaslu, the world's eighth highest, happened in 2011 October.

Last July, she reached the Broad Peak at 8,047 meters high above sea level, already creating a record as the first Chinese woman to successfully crest 13 8,000-meter-plus mountains, all in a span of six years.

However, the journey to the "grand slam" was full of twists and turns.

She had to give up just 80 meters away from the summit of Shishapangma in her first attempt made earlier this year given the severe weather conditions.

Before her feat this time, the teeth inflammation hindered her progress and forced her to go down the mountain to receive treatment.

From a white-collar worker once trapped in life difficulties to a celebrated amateur climber conquering numerous high mountains, Lou's stories are as impressive as her climbing achievements.

Luo suffered great misfortune in 2006 when her husband went missing all of a sudden and left her and their four-year-old son with over 2 million yuan debt.

In following two years, she managed to pay off her husband's debt and deal with complicated lawsuits. One of her houses was sold to pay off the debt.

Since Luo loves sports and outdoor activates, she began to climb mountains when things settled down and never imagined that she could reach such a height at first. She just took it as a way to find strength for life after all the sufferings.

In 2008, she first crested a 5,000-meter-plus mountain and was inspired to climber higher.

Due to the large expense on climbing, Luo lives a thrifty life and put most of her money into it. She said it was worth it because she hoped that her attitude toward life could set an example for her son and other women.

"I am a single mother and I want to influence other females, mothers particularly. I want to make them believe that they can do more if they open their mind," Luo said.

On her way to the mountain top, Luo has encountered avalanches, earthquake, attack, death of her companies and her instructor.

When she challenged the Kangchengjunga Peak in 2013, five of her climbing partners did not come back alive.

"My friends were healthy and cheerful. Their deaths make me realize that people's life is way too fragile and small against nature," she said.

However, her brushes with death did not stop her from chasing her dream. She chose to confront the fear of death with more thorough preparation and greater caution in climbing.

"To reach to the mountain peak is not the ultimate goal. What I am really excited about is to expand my possibilities," Luo said.

"People should have a dream in life. People should have something that is worth sparing no effort to do. Others might not remember each and every peak I have ever climbed on, but the peaks will remember for sure that a Chinese woman has been there," She added.