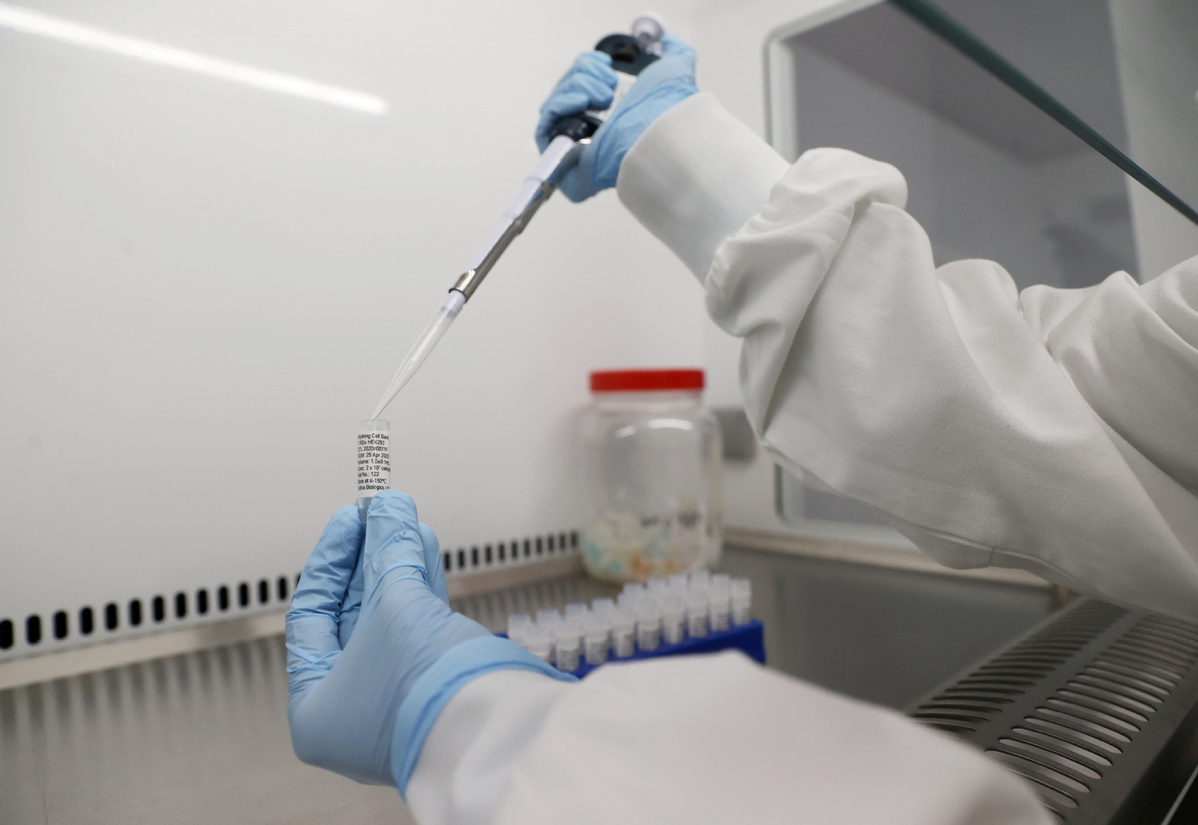 Scientists are seen working on a potential vaccine for COVID-19, following the outbreak of the coronavirus disease (COVID-19), in Keele, Britain, April 30, 2020. (Photo: Agencies)

The world may see its first novel coronavirus vaccine deployed between March and June next year based on the most optimistic estimate, a leading COVID-19 expert in Shanghai said on Friday.

If not, chances are that a vaccine will become available at the end of next year or the beginning of 2022, said Zhang Wenhong, leader of the Shanghai team of experts in the clinical treatment of novel coronavirus pneumonia cases.

There are 108 novel coronavirus vaccines undergoing research and development around the world, according to a World Health Organization list, with some having entered clinical trials.

A senior Chinese scientist said on Friday that the country had five vaccines－one vector and four inactivated－that had entered the first two phases of clinical trials in China. They are set to complete their phase two trials in July.

In the United States, some vaccines have proceeded to phase three clinical trials.

But the progress of work on vaccines would generally depend on whether the novel coronavirus stayed around for the long term or basically disappeared, just like the viruses responsible for severe acute respiratory syndrome and Middle East respiratory syndrome, said Zhang, who is also director of the department of infectious diseases at Shanghai Huashan Hospital Affiliated with Fudan University.

If the virus disappears, almost all the R& D programs on vaccines will probably be suspended, he said during a discussion hosted by Shanghai-based conglomerate Fosun International.

"The key lies in how to make the world operate as proper and normal as possible over the two years ahead of us," Zhang said.

He encouraged the public to be confident as the cruelest contagions in human history had previously been brought under control in around two years.

"That means even if the virus cannot be eliminated next year, we'll be capable of controlling the spread of the disease," Zhang said. "I believe the end of 2021 will witness a turning point for COVID-19."

Zeng Yixin, deputy director of the National Health Commission, told a news briefing on Friday that participants in phase two clinical trials for the vaccine candidates had reported no major adverse effects.

The five vaccines have been administered to 2,575 volunteers, including 539 for phase one trials, Zeng said.

"We have gained preliminary data for phase one trials on the vaccines' safety and ability to create protective antibodies," he said.

"Some volunteers are taking more than one dose now, and relevant research is ongoing," Zeng said. "We haven't recorded any major adverse effects for volunteers in these trials.

"If everything goes according to plan, these projects would finish their phase two trial in July."

China has other types of vaccines in the works, Zeng said, adding that more vaccine varieties are expected to be approved in June for clinical trials.

A viral vector vaccine uses a chemically weakened virus, in this case an adenovirus, to transport pieces of the pathogen into the host tissue, according to the US Department of Health and Human Services.

As for the four inactivated vaccines, two have been created by China National Biotec Group, and one by Sinovac Research & Development. The manufacturer of the fourth one has not been announced.

An inactivated vaccine uses a dead version of the germ that causes a disease to trigger an immune response. The tried-and-true method is incredibly safe because dead germs do not cause illness.