A Hong Kong protester admitted he is guilty of rioting on Monday in court, marking the first of such admission since the anti-extradition bill protests began in June 2019. 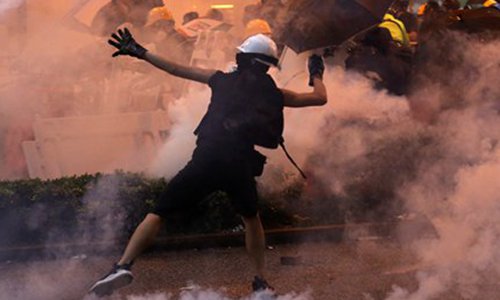 Sin Ka-ho, 21-year-old, a lifeguard of a swimming pool, participated in a protest on June 12, 2019 to stop the Hong Kong Legislative Council (LegCo) from considering the anti-extradition bill, local media outlet on.cc reported Monday.
The LegCo was due to hold a meeting to consider the bill but the meeting was postponed after rioters blocked roads, caused disturbances and breached the security cordons set by the police.
He was charged with one count of rioting and two counts of offense against police.
He admitted he threw helmets, ice cream cones and umbrellas to the police security cordons. He was finally arrested by the police and charged with unlawful assembly.
Hong Kong media reported previously the spokesperson for the Hong Kong Special Administrative Region said on June 12, 2019, the protest caused great inconvenience to traffic and many of the rioters used dangerous weapons to escalate violence.
The police were restrained and tolerant, but protesters kept using iron railings, bricks and other materials to breach the police security lines, said Police Commissioner Stephen Lo Wai-chung.
Hong Kong Chief Executive Carrie Lam delivered a speech on that day evening, strongly condemning the riots that have disrupted social peace and violated the law. She called on Hong Kong residents to stay away from violence.