A medical team of the Hong Kong Children's Hospital successfully transplanted a heart donated from the mainland to a 4-month-old baby in Hong Kong Special Administrative Region on Saturday, achieving a historic breakthrough in the sharing of human organs for emergency medical assistance between the two places for the first time. 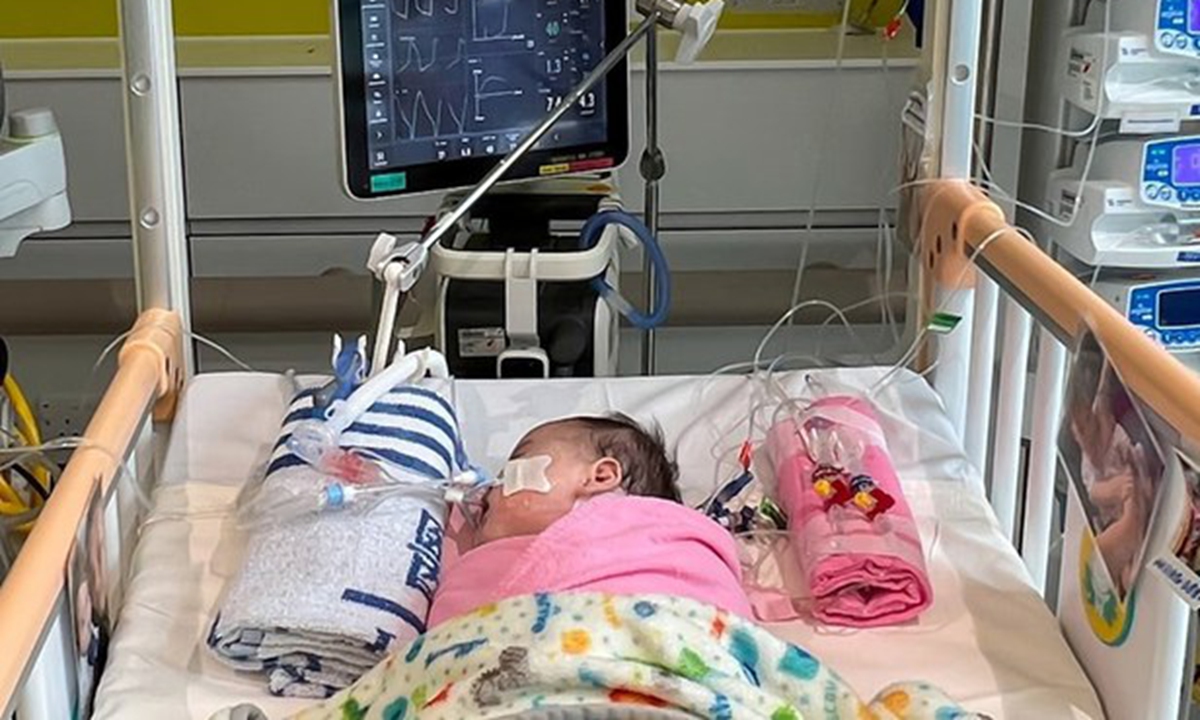 The donated heart, which had been matched by China's Organ Transplant Response System (COTRS) through several rounds and had no suitable recipient, was successfully matched in Hong Kong through the joint efforts between 24 departments and 65 medical experts in the mainland and Hong Kong.

Cleo Lai Tsz-hei, the recipient of the transplant from Hong Kong, was diagnosed with heart failure 41 days after birth and was in critical condition. Receiving a heart transplant was the only way to keep her alive, according to media reports.

Moreover, the acceptable heart donation for Cleo requires a donor weighing between 4.5 kilograms and 13 kilograms, and the chances of a suitable donor appearing in Hong Kong are slim to none. Cleo's mother earlier issued an urgent appeal through the media for a donated heart to help her daughter survive.

In this regard, all sections of society in Hong Kong expressed their willingness to seek assistance from the National Health Commission (NHC) in various forms. "I implore the country to allow, if there is a donated heart in the mainland that meets the medical needs of Cleo and there is no suitable recipient in the mainland, it can be smoothly passed through customs and shared with Hong Kong to save Cleo's life," Hong Kong's Secretary for Health Lo Chung-mau wrote to the NHC and the General Administration of Customs.

The NHC and the China Human Organ Donation and Transplantation Committee attach great importance to this and require COTRS to establish liaison mechanisms and emergency plans to coordinate cross-departmental communication and cooperation in technical, medical and management aspects.

An organ coordinator from the Red Cross Society of Shenzhen, Guangdong Province, who was involved in the organ donation this time, told the Global Times on Sunday that the whole process had received support and efforts from all sides in the Chinese mainland and Hong Kong, with the aim of saving a life and keeping the wishes of the donor's family being fulfilled.

COTRS initiated the allocation of a donated heart of a child with brain death due to brain trauma in the mainland on December 15. As a very low-weight donor, no suitable recipients were found after multiple rounds of automatic matching with 1,153 patients on a national waiting list for heart transplants in the COTRS system. In the end, the medical assistance human organ-sharing plan between the Chinese mainland and Hong Kong was launched.

Some netizens from the Chinese mainland asked why a baby from Hong Kong who has not lined up in the COTRS system can get a donated heart when there is a huge shortage of donated organs in the mainland.

In response, the organ coordinator told the Global Times that the requirements for organ donation are extremely high, noting that all the prerequisites including the conditions of the donor and recipient, the time for the organ to be transported on the road and the preparation for surgery must reach the standards before the donation can be completed.

The COTRS system has already gone through several rounds of matching, which is done automatically by computer without human intervention, said the organ coordinator.

"We can't waste a healthy organ when there are no suitable recipients in the system. Hong Kong has also recently made an application and therefore carried out the first organ donation between the two sides," the coordinator added.

The coordinator explained that the young donor was from Shenzhen, a city bordering Hong Kong, and the short distance has ensured the smooth operation of organ donation, which was one of the important reasons why the Hong Kong patient can get the donated heart.

"Otherwise the heart will be wasted like the liver donated by the child in Shenzhen, which no one wants to see," she noted.

Medical teams from both jurisdictions, as well as customs officers in Shenzhen and Hong Kong, carried out emergency drills to reduce the customs clearance time to eight minutes, racing against the four-hour limit for preserving donated hearts, said Wang Haibo, head of the COTRS for medical assistance contact between the mainland and Hong Kong.

The collection of donated hearts began at 17:00 pm on Friday, and the hearts were delivered to the Hong Kong Children's Hospital at 20:00 pm under the escort of Hong Kong police on the same day. At 1:00 am on Saturday, Cleo's heart transplant operation in Hong Kong was successfully completed, and she has not required extracorporeal circulation support at present.

The number of organ donations and transplants in China has increased significantly, as the quality and technical capabilities of organ transplants continued to improve. As of the end of October 2022, a total of 42,500 organs had been donated in China, and more than 126,300 large organs had been donated, according to Guo Yanhong, director of the medical emergency department of the NHC.

There are many people from Hong Kong and the island of Taiwan living in Shenzhen, the organ donation coordinator from Shenzhen told the Global Times. "Although they cannot enter the COTRS system to become a donor, many of them still find me to register as an organ donor," she said.

"They are all Chinese people just like us from the Chinese mainland. We are all sincerely happy no matter whose life is extended through an organ donation," said the coordinator, who also expressed her gratitude and admiration to many local residents from overseas who have chosen to donate their organs in China.

Lo hoped that a long-term mechanism could be established through this case to include hospitals in Hong Kong in the COTRS system, so as to make the most of the donated organs after the death of citizens, and save the lives in Hong Kong and the Chinese mainland.

This organ donation is an "ice-breaking action" that will surely promote the further integration of organ donation institutions and systems in the Chinese mainland and Hong Kong. Relevant institutions from the mainland, including the Shenzhen Red Cross Society, will continue to promote exchanges with our Hong Kong counterparts to benefit more people, the coordinator remarked.

The Hong Kong Special Administrative Region's Chief Executive John Lee Ka-chiu expressed his gratitude to the medical teams of the two places for their efforts to create medical achievements and give the baby girl a chance to survive. "This success represents a major medical achievement in the mainland and Hong Kong and it also reflects the brilliance of humanity and great love," Lee said.