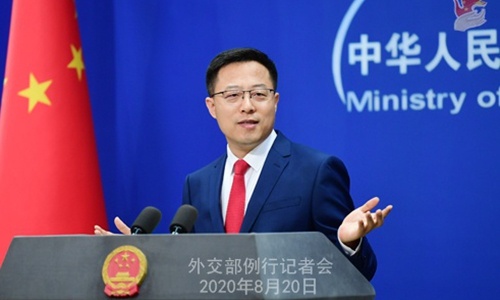 The opening of the Vientiane-Vangvieng section of the China-Laos expressway is expected to boost cross-border business and people-to-people exchange between the countries, said Chinese Foreign Ministry Spokesperson Zhao Lijian on Wednesday.

Construction of the first phase, also known as the Vientiane-Vangvieng section has completed 13 months ahead of schedule and will shorten the road trip from 35 hours to one hour.

The project kicked off on December 30, 2018 led by China's Yunnan Construction and Investment Holding Group (YCIH) in cooperation with the Lao government, according to media reports.

The section, about 110 kilometers long, is designed as a two-way four-lane expressway with a designated speed of 80 to 100 kilometers per hour.

The whole China-Laos expressway starts in Vientiane and ends at the Laos-China border town of Boten, with an approximate length of 440 kilometers. The project adopts Chinese technical standards for construction and operation and is designed with four phases.

A Chinese proverb says, "If you want to get rich, build a road first." "We're happy for Laos' zero break of expressway," Zhao said.

"We believe that the opening of the Vientiane-Vangvieng section will improve the livelihood of the local residents, boost cross-border business and people-to-people exchanges between the two countries," Zhao added.