The spokesman for the national political advisory body on Friday called for the reform of China's structures of industry, energy consumption and transportation to curb air pollution as the country shifts to high-quality growth. 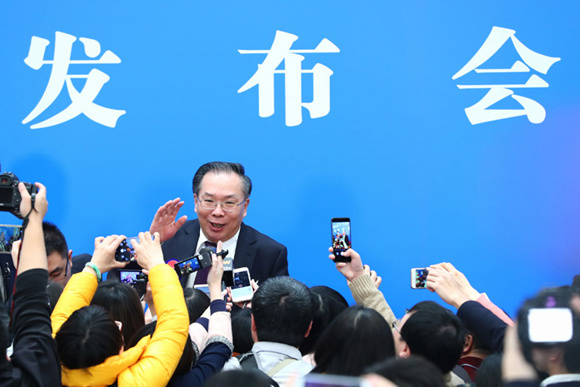 Wang Guoqing, spokesman for the first session of the 13th National Committee of the Chinese People's Political Consultative Conference, at a news conference in Beijing, March 2, 2018. (Photo:Xinhua)

"Development with high emissions and pollution affects not only the long-term economic development, but also people's health. That is not the development we want," Wang Guoqing, spokesman for the first session of 13th National Committee of the Chinese People's Political Consultative Conference, said at a news conference.

"Lucid waters and lush mountains are as valuable as gold and silver," said Wang, emphasizing air pollution control doesn't conflict with the effort of developing the economy and improving people's lives.

Though achievement has been made in the Beijing-Tianjin-Hebei region in air pollution control and people witnessed more blue skies in the capital last year, Wang said the achievement is made based on "heavy prices" and thanks to favorable meteorological conditions for the dispersal of pollutants.

"When the meteorological conditions were not favorable several days ago, we all felt the air quality turn bad again," said Wang, referring to heavy smog in Beijing on Wednesday, when the capital issued a yellow alert, the third highest of a four-tier alert system.

"These problems have not been solved completely," he said.

Wang also called on people to lead a low-carbon life. Air pollution control is a complicated project that takes a long time, but as long as all people attach importance to it with relentless actions to move the project forward," we are full of confidence in winning the campaign of protecting the blue skies," he said.