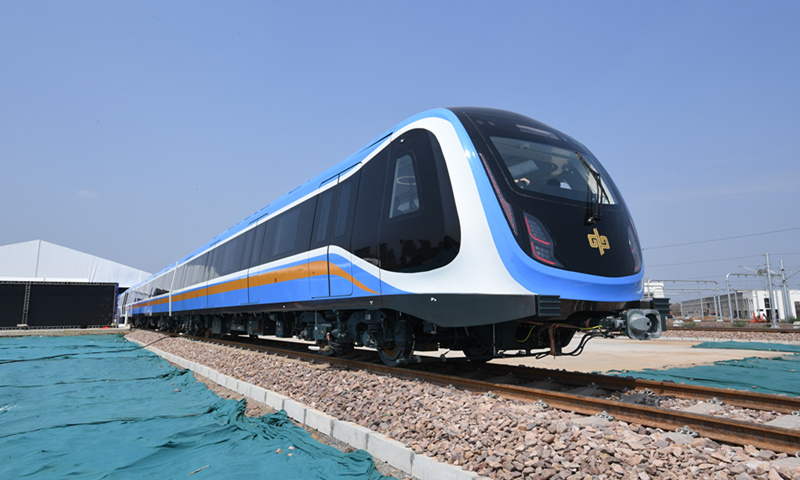 A Chinese company rolled out the first subway train with domestic technologies and standards in Zhengzhou, Central China's Henan Province on Monday, marking a crucial breakthrough in the country's push for standard-setting and technological independence in the rail sector.

The train was produced by CRRC Corp with independent intellectual property rights and a Chinese standard rate of more than 85 percent, according a statement CRRC sent to the Global Times on Monday.

The new train will operate between Zhengzhou Airport and Xuchang, Henan Province with a speed of 120 kilometers per hour and level 4 Grade of Automation (GoA).

GoA level 4 refers to a system in which vehicles run fully automatically without any operating staff onboard, according to the International Association of Public Transport.

It is also the first train to roll off the assembly line that uses a Chinese-standard platform for subway trains after two years of research and development.

In July 2019, CRRC, along with the China Association of Metros, subway companies and scientific research institutions, kicked off a series of China-standard metro train development and test projects. The goal was to achieve breakthroughs in core technologies and build a standardized metro train platform suitable for the domestic market.

Compared with conventional metros, all key components of metro trains under the platform are independently developed and manufactured. The parts of vehicles from different lines, models and manufacturers can be interchanged, which can greatly shorten the development cycle and reduce the costs of design, manufacturing and maintenance.

The platform is able to make two types of trains with speeds of 80 kilometers and 120 kilometers per hour, respectively.

There is a complete industry chain to support the development of metro trains using domestic standards, with an industry cluster of more than 300 suppliers of parts and components, 205 corporate standards, 22 group standards and 10 national standards, according to CRRC.