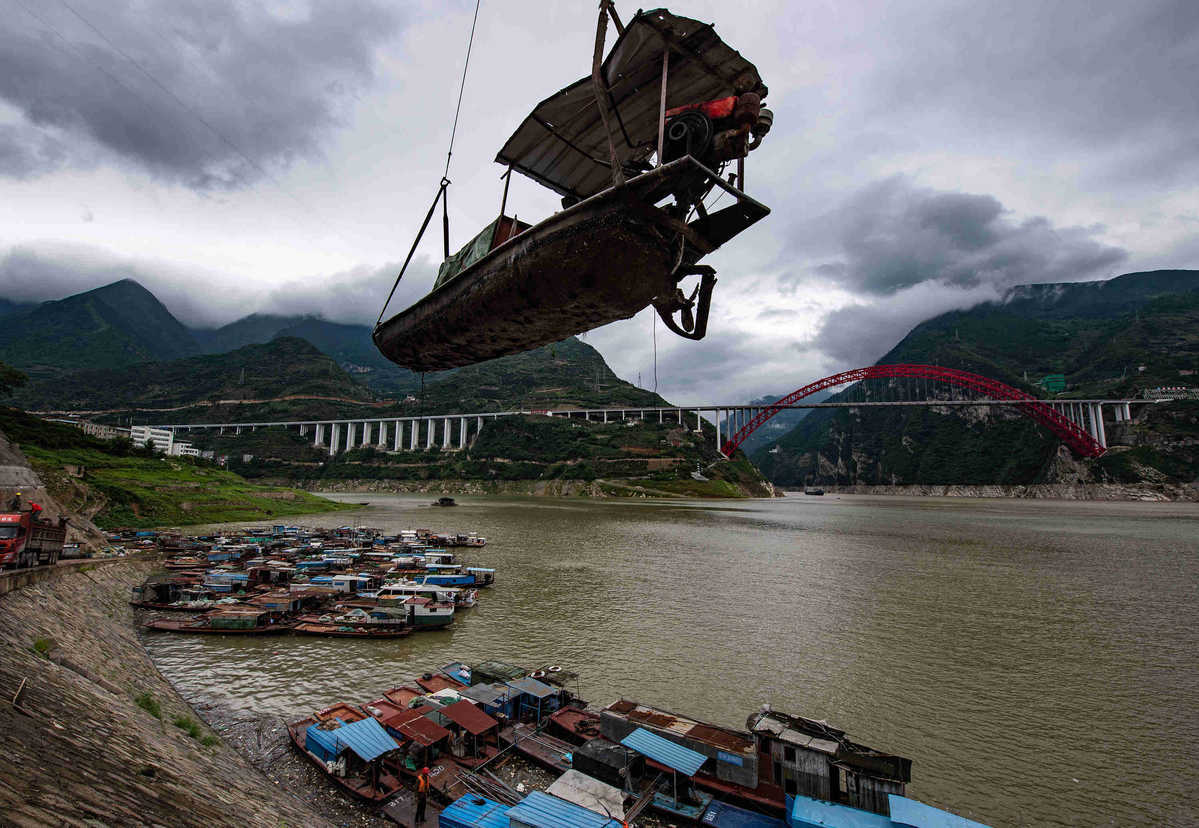 A fishing boat is hoisted ashore for dismantling in Yichang's Zigui county, Hubei province, on July 13 in preparation for a 10-year fishing ban on the Yangtze River. (Photo: agencies)

Research is underway to formulate policies and measures to ensure implementation of an extensive 10-year ban on fishing in the Yangtze River starting next year, the Ministry of Agriculture and Rural Affairs said.

The ban, which takes effect on Jan 1, outlaws all types of fishing, except for scientific research, in the main channel of the Yangtze, China's longest river, and in its major branches and two major lakes connected to it. The ban was adopted to restore the ecology of the river, which has deteriorated because of overfishing.

Existing regulations ban fishing in the river for four months every year.

To ensure effective supervision and law enforcement of the 10-year ban, the ministry is working with other central government departments, including the National Development and Reform Commission, in drafting policies and measures for how enforcement will work and ensuring adequate personnel and material and financial support, according to the ministry.

Meanwhile, local governments along the river will intensify building fishing enforcement units, and all 227 key counties will have professional law enforcement personnel and necessary equipment and funding for the task, the ministry said.

As the ban approaches, however, more than half of the 227 cities and counties still lack independent fishing enforcement authorities, and 14 of them do not have any full-time law enforcement officers for fishing administration, which the ministry said falls far short what is needed.

To enforce the ban, about 231,000 fishermen in 10 provinces and municipalities who have been relying on the river for a living will have to stop fishing before the end of the year, and more than 111,000 fishing boats will be disposed of, the ministry said.

By early September, nearly 95 percent of all fishing boats operating in key waters of the Yangtze River had been retrieved and properly disposed of, and about half of all the fishermen affected had turned to other jobs, officials said.

The ministry will pay close attention to providing essential needs and helping with re-employment of fishermen affected by the ban to ensure their basic living standards while speeding up the retrieval of boats and fishing nets, it said.

Related authorities will provide support in various forms for re-employment of the fishermen, including providing free training for those who intend to turn to ocean fishing and helping them obtain needed certificates, the ministry said.

Market regulation authorities across China have also intensified law enforcement ahead of the ban, including improving supervision to halt illegal fishing in the river and online trade in wildlife caught in the river, according to the State Administration for Market Regulation.

Yu Kangzhen, vice-minister of agriculture and rural affairs, said the ecology of the Yangtze River has been degraded significantly in recent years through high-intensity human activities, resulting in a near-depletion of fish.

The river used to provide up to 60 percent of all freshwater fish in China, a figure now reduced to less than 1 percent, which means the river has lost its value for the fishing industry, he said.

"Implementing the ban is also an effective means to change the dilemma confronting many fishermen, who face depleted resources, and to serve their long-term interests," Yu said.

More financial support, including special subsidies from local governments, will be arranged to help resettle the fishermen affected in order to carry out the ban, according to the ministry.

Liu Kai, a researcher at the Chinese Academy of Fishery Sciences, said a 10-year ban will be an unprecedented move to protect fishing in China.

It is expected that the ecology in the Yangtze River will be significantly improved by the ban and other environment restoration measures, resulting in a great rebound of aquatic life in the river, he said.