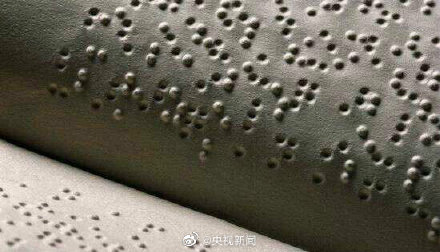 Braille printing is complex and costly. Each Braille character or "cell" is made up of six dots arranged in a rectangle containing two columns of three dots each. A dot may be raised at any of the six positions to form 64 combinations representing different letters or symbols. (Photo: CCTV)

Among the 10.71 million participants sitting for this year's college entrance examination or gaokao, five blind candidates are taking the exam with test materials in Braille, China Central Television reported on Tuesday.

The five blind candidates are from Shanxi, Anhui, Shanghai and Tibet autonomous regions, with two provided Braille tests in the Tibetan language.

Compared to ordinary examinees, blind and visually impaired students should be provided with exam papers in Braille or bearing large-print characters, and are allowed to use auxiliary aids according to their needs.

The content and difficulty of Braille test papers are similar to those of ordinary candidates. Only when there are graphics in the test papers are some changes needed to assist blind and visually impaired students.

Considering that blind and visually impaired students have to spend more time taking the test via touch, their time is extended by 50 percent of the total duration, according to the exam rules.

To ensure the fairness to all the candidates, the Ministry of Education published a notice in 2014 stipulating examining bodies should provide necessary assistance and equipment to enable blind and visually impaired students to take the exam.

Li Jinsheng, a 46-year-old masseur, took that year's gaokao in Braille in Queshan county in Henan province, becoming the first in the country to do so. In later years, more blind candidates got the chance to take the exam, and some were among the top scorers.