CHINA Five Chinese in France detained after handing out masks have been released: embassy

Five Chinese in France detained after handing out masks have been released: embassy

A spokesperson for the Chinese Embassy in France said five Chinese citizens have been released after being detained by local police in two separate cases related to facial masks and other protective equipment to fight against COVID-19. 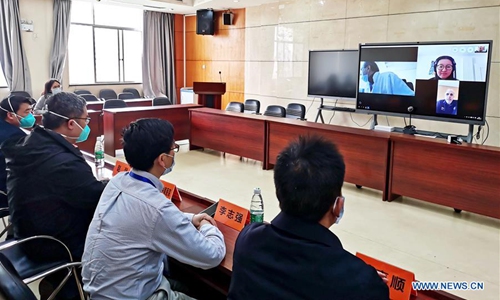 Medical experts from Zhongnan Hospital of Wuhan University communicate with French counterparts via a video call in Wuhan, central China's Hubei Province, March 24, 2020. Experts from the hospital have shared their experience in treating COVID-19 patients via video calls with peers from France, Canada and Kenya recently. (Photo: Xinhua)

In one case,  two Chinese people  distributed face masks for free to their compatriots in France, who were in urgent need of epidemic prevention materials, at the request of a fellowship association of global Chinese compatriots born in Wenzhou in East China's Zhejiang Province, said the embassy in an announcement on its official website on Wednesday.

They also donated some masks to local hospitals, police bureaus and other organizations.

The embassy noted that the two people had not violated French laws and regulations, as the masks entered the country through legal channels, the French government does not prohibit people from wearing masks, and they were engaged in public welfare rather than commercial activities.

The announcement said the embassy has expressed its concerns to the French authorities over the incidents and hope that similar incidents will not happen again.

The announcement came after police in Paris on April 5 found that a Chinese compatriot association had stored more than 15,000 facial masks, media reported.

"The Chinese embassy in France will, as always, make every effort to safeguard the legitimate rights and interests of Chinese compatriots in France," said the announcement.

The French government is currently collecting masks for medical workers and prohibits individuals from purchasing, selling or keeping them in their possession. Although the association says the masks were given out free of charge to Chinese people, they were not medically qualified and could not be proven to have medical use. The police detained two of the society's members and launched an investigation, local media reported Tuesday.