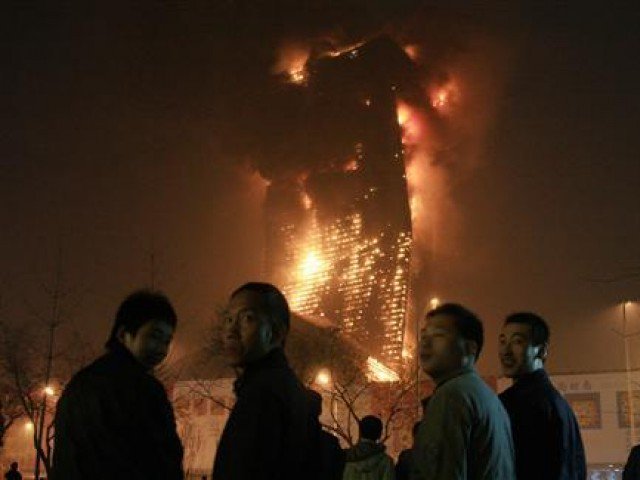 Five people were killed and nine others injured in a Beijing residential building fire on Wednesday morning.The fire broke out at 1:18 am in Shibalidian township, Chaoyang district, according to the Beijing fire department.  The injured were taken to hospital, The Beijing News reported. Their condition was not known at press time.The fire was triggered by flames erupting out of two electric bicycles, the department said. Police on Wednesday detained the house owner after finding that the house was allegedly self-built for rental, the Xinhua News Agency reported.She heard a noise outside and looked out to see a resident running out of the building with "injuries" all over his or her body, a shop owner told the Beijing Evening News. The report did not say if the victim was male or female.There was also a pile of charred 100 yuan bank notes left near the exit of the building, the report said. Combustible goods were piled up in the self-built apartment complex where all the electrical wiring had been installed by the tenants themselves, firefighters told the Beijing Evening News.On top of that, the tenants used high-power electrical appliances, the building had no fire extinguisher and the roof was made of foam sheets. "Once such materials (foam sheets) catch fire, it will rapidly spread and emit harmful gas," the firefighter told the paper.Beijing Communist Party chief Cai Qi and Chen Jining, Beijing's acting mayor, went to the scene of the fire to oversee rescue work and also visited those injured at the hospital.They urged a thorough safety overhaul of illegal business venues and houses leased for group tenants in Beijing. Owners of such properties should be held responsible for its safety, Xinhua said.The fire happened less than a month after a dorm fire killed 19 in the city's southern district of Daxing on November 18, which was caused by an electric wire fault.