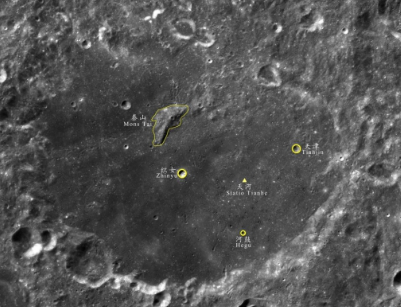 The five places are clearly shown on high-resolution images based on data from the Chang'e 2 and Chang'e 4 missions. (Photo: China Daily)

Five more geographical entities on the moon have been given Chinese names, based on discoveries from China's latest Chang'e 4 mission, according to a news conference on Friday.

The China National Space Administration, Chinese Academy of Sciences and International Astronomical Union held a joint news conference Friday to announce the five names approved by the IAU on Feb 4.

The landing site of the Chang'e 4 probe is named Statio Tianhe, and three annular pits around the landing site are called Zhinyu, Hegu and Tianjin. The central peak in the Von Karman Crater is referred to as Mons Tai.

The five places are clearly shown on high-resolution images based on data from the Chang'e 2 and Chang'e 4 missions.

China's Chang'e 4 probe, launched on Dec 8, landed on the Von Karman Crater in the South Pole-Aitken Basin on the far side of the moon on Jan 3.

Tianhe, another name for the galaxy in ancient China, implies that the Chang'e 4 probe served as a pioneer in the history of human lunar exploration.

According to the IAU naming rules, the landing site name has the prefix of Statio in Latin. And so far only two places have such a prefix, the first being the landing site of Apollo 11, Statio Tranquillitatis.

Zhinyu, Hegu and Tianjin are the names of stars in China's ancient star chart, as the three pits in the lunar crater formed a shape similar to these three celestial bodies.

Mount Tai is one of the five most famous mountains in China in East China's Shandong province and stands 1,545 meters tall above sea level. The central peak, Mons Tai, in the lunar crater measures 1,565 meters in height from its base.

In August 2010 and October 2015, China had applied to name the landing sites of Chang'e 1 and Chang'e 3, and gained approval, and in January this year, China applied to the IAU for the five new names.So far, a total of 12 lunar features have been named by China.

Naming entities on lunar surfaces started in the 17th century in Europe, and in the 20th century, the United States and the former Soviet Union had the most names due to their lunar explorations.