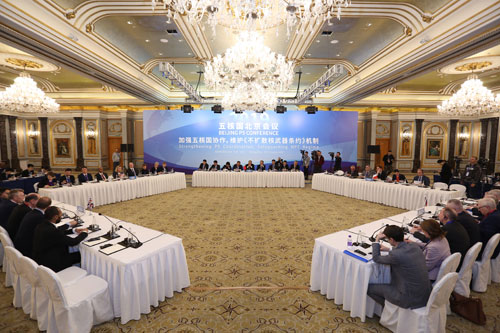 The five countries, all nuclear-armed, have taken turns hosting conferences since 2009 to maintain regular communication on issues related to nuclear strategy and safety. Their latest meeting was held in 2016 in Washington D.C., the United States. China is currently the rotating coordinator of such a cooperation mechanism.

Stressing that the NPT is the cornerstone of the global nuclear non-proliferation system, the five powers pledged to comprehensively implement the NPT, said Zhang Jun, head of the Chinese delegation and assistant minister of Foreign Affairs, when making conclusion remarks after the conference. The P5 agreed to strive for greater progress in nuclear disarmament, do their utmost to resolve the nuclear non-proliferation issue through political and diplomatic measures, and enhance international cooperation in the peaceful use of nuclear energy, Zhang said.

He added that the nuke powers will also strengthen exchanges on nuclear policies and strategies so as to prevent nuclear risks caused by misunderstandings and misjudgments.

"The P5 should consolidate coordination and cooperation to seek common security and maintain global strategic stability," he noted. China will remain committed to building consensus and managing differences among the five nuclear powers in terms of strategic security, replacing the zero-sum game with win-win cooperation and contributing to world peace and stability, Zhang said.