Five reasons why China's global stature will rise after pandemic 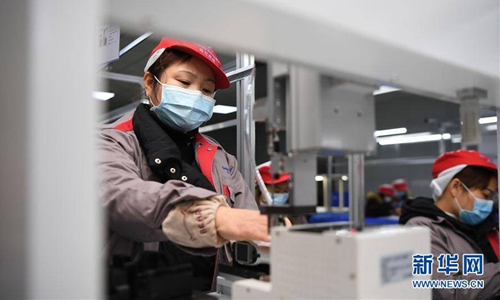 People work at a factory of a toy-making company in Xiangtan, central China's Hunan Province, March 6, 2020. Since the outbreak of the COVID-19, the toymaker in Hunan Province has changed its factory over to production of infrared thermometer to aid the fight against the novel coronavirus. (Photo: Xinhua)

As many countries around the world fail to contain the novel coronavirus and a profound global crisis that could upend the global political and economic order looms, questions have been raised about China's capability to withstand a new wave of public health and economic risks and maintain its standing in an increasingly hostile and polarized world, despite its effective measures so far to stem the deadly virus domestically and jumpstart the economy.

However, in interviews with the Global Times, several former senior Chinese officials and prominent analysts offered at least five factors ranging from its robust domestic supply chain to a vast market and an efficient crisis management mechanism that prove once again the obsolete predications of China collapsing are nothing more than laughable and wishful thinking among some anti-China forces. China will not only be able to overcome the new risks and challenges but could also further raise its overall global profile, the former officials and analysts noted.

Prepared for the worst

Even after watching how China effectively reined in the coronavirus and having sufficient time to prepare for what was widely expected to come, many governments around the world, particularly in Europe and the US, still failed to slow the outbreak, let alone stop it. What's worse is that many countries still don't seem to have any clue as to how to cope with the epidemic itself and its economic fallout, other than closing borders and pointing fingers.

Their haphazard efforts have cost more lives that could have been saved. As of Wednesday night Beijing time, the virus has killed 8,205 people globally and sickened 203,529 and the number of deaths and infections outside China has surpassed that inside the country, according to data from the Johns Hopkins University & Medicine.

Beyond a human cost, global financial markets have also seen worse volatility akin to the global financial crisis in 2008 and the global economy is on the edge of slipping into a recession, as businesses have been shut, supply chains crippled and global travel restricted.

More troubling is that the failure of these Western countries now threatens hard-fought results in containing the virus by countries such as China and Singapore, which are already seeing rising numbers of imported cases, and dampens the slightest hope that the world economy might see recovery in one of the world's most vibrant regions.

"The spreading global pandemic means China's anti-epidemic efforts have to shift from stopping domestic spread to preventing influxes from overseas. It means the epidemic's impact on China's economy could be prolonged and further intensify," Guan Tao, a former senior official at the State Administration of Foreign Exchange, told the Global Times on Tuesday.

As China faced a rising number of imported cases and several economic indicators for the first two months of the year dropped to historical lows, many have once again predicted that China is collapsing, pointing to further disruptions to businesses and a drop in foreign demand for Chinese products and services.

However, at the moment, no country in the world is better positioned to deal with even the worst scenario than China, according to Guan. "Obviously, we don't want to see a global decoupling but if the epidemic causes a temporary decoupling, we have much more room than other countries to respond," he said, pointing to various strengths of the Chinese economy that will help China weather new challenges.

The first is China's self-sufficient supply chain for almost all products and a vast domestic consumer market that will keep the country and the economy running, even when other countries have to shut down.

Many countries, including the US, have already seen massive shortages in medical supplies and other daily necessities. Despite rising calls for decoupling, China remains an irreplaceable player in the global supply chain for almost everything from cars to clothes to masks. Not only that, China also has a huge domestic market that makes up almost 60 percent of its annual GDP growth and that many foreign companies heavily depend on.

"Some have warned that China will lose export orders due to the epidemic. I don't agree with that. I think the demand for Chinese consumer goods will even increase because business closure is worse in many countries than in China," Wei Jianguo, a former Chinese vice commerce minister, told the Global Times on Tuesday.

Not only is the Chinese economy not falling, "it's the sole stabilizing force of the global economy. It is not only stable right now but will become a main engine and backbone for the global economy to recover," Wei said.

The second strength China has that other countries, including the US, do not is an extremely efficient mechanism to deal with public health and economic crisis, analysts said. China has shown its ability to promptly mobilize roughly one-fifth of humanity behind a single goal and closely coordinate various policies for different areas and stages among its vast and complex bureaucratic system, while many other countries stumbled at almost every step, they noted.

"Under these circumstances, China's systemic strength is very significant. In other words, China's system handles such dangerous and urgent situations more effectively," Guan said, "A simple example, [US President Donald Trump] might have a say in small spending, but for spending more, he has to go to Congress. In China, one meeting can settle that and more."

Compared to the bungled response so far from many Western countries, it took China just days after discovering human-to-human transmission to mount a nationwide response. China built hospitals in a matter of days to save lives, while countries such as the UK have suggested allowing millions to be infected and hundreds of thousands to potentially die to achieve the so-called herd immunity.

Economically, China has also adopted a more measured and targeted approach by combining both monetary and fiscal policies at the central and local levels to support the economy, rather than flooding the market with cash like the US and several other major economies did. China started to help businesses return to work around 20 days after its national response.

The third factor is that China has already put that same mechanism in place to fend off risks from the seemingly out-of-control situation overseas, analysts said.

"Imported cases will not affect China's steps to resume production," Zeng Guang, chief epidemiologist of the Chinese Center for Disease Control and Prevention, told the Global Times in a recent interview, noting that the risk of secondary transmission of imported cases remains low, considering the overall containment efforts and strict management.

As the number of imported cases rises, top officials have called preventing imported cases as a top priority and local governments, including Beijing, followed up by taking strict measures such as mandatory 14-day quarantine for all international travelers.

At the same time, Chinese officials have also stepped up support for businesses to resume operations rather than slow the process. On Tuesday, officials announced a slew of new measures, including discounted loans to support businesses, after a top level meeting on Monday night chaired by Premier Li Keqiang called for accelerated efforts to push for "full resumption" of business operations and work.

The fourth factor is China's sufficient monetary and fiscal tools, which many major economies, including the US, the EU and Japan, no longer have, according to Guan. "Our fiscal and monetary policy is still in normalized status, the US has fired all its ammunition and still failed to pull back the stocks," he said, referring to the US decision to cut interest rates to zero.

China has so far refrained from broad-based monetary policy and instead relies on fiscal and other policies such as tax cuts, discounted loans and relaxed regulations to guide more investments in areas such as 5G, big data and other new infrastructure and boost consumption.

The fifth factor is China's rising reputation among foreign countries and businesses, as it continues to improve the domestic situation and offer support for more countries in dire need of help such as Italy and Pakistan, analysts said.

China's support for these countries and global organizations such as the WHO also helps expand its "circle of friends" and enhance global cooperation, despite attempts by some US officials to isolate China, Wang Yiwei, professor at the School of International Relations at Renmin University of China, told the Global Times.. "This is also a moment for China to tell its true friends [from foes]," Wang said.

All these factors will not only help stabilize the domestic economy but also lift its global standing, as it did in past crises, the former officials and analysts said.