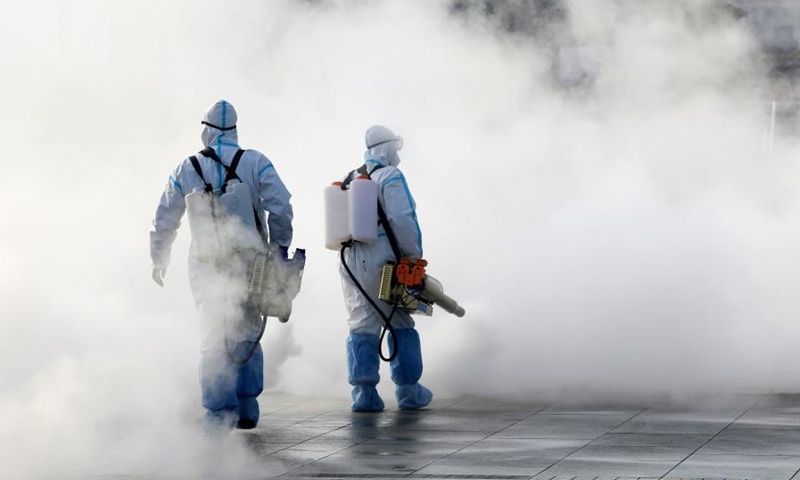 After another round of arduous struggle against the raging COVID-19 outbreak that swept across the country in the first month of 2021, China has seen the curve in infection numbers flattened in multiple places, including the mega-cities of Beijing and Shanghai, and the densely-populated North Chinese province of Hebei.

Experts reached by the Global Times suggest that the trend indicates a phased success in curbing the disease, and a large-scale outbreak will unlikely be repeated this winter.

China reported 42 new confirmed COVID-19 cases on Monday, nine of which were imported from overseas, and the other 33 locally confirmed in Northeast China's Heilongjiang and Jilin provinces, and North China's Hebei Province. Sixteen asymptomatic cases were also reported, with no new suspected cases found, according to the website of the National Health Commission.

Beijing and Shanghai, two mega-cities in China that are home to over 42.6 million people, reported no new locally confirmed cases on Monday. The six imported cases, two in Beijing and four in Shanghai, have all been put under centralized quarantine at designated hospitals.

Beijing authorities said Monday at a press briefing that the capital has effectively contained the spread of COVID-19 infections through scientific and effective management measures. Currently, COVID-19 medium-risk areas in Beijing have been cleared, and the epidemic prevention and control situation is stable.

Hebei, which was badly hit by the virus in the latest flare-up, also began ending lockdowns and resuming businesses. After experiencing a peak of infections from January 10 to 15, which saw an average daily increase of almost 80 cases, the numbers started to drop continuously, with only one new confirmed case found on Sunday in Shijiazhuang, the capital city of Hebei, local authorities stated in the latest epidemic report.

"Hebei's quick reaction to the epidemic has brought the situation under control in a timely manner," Yang Zhanqiu, deputy director of the pathogen biology department at Wuhan University, told the Global Times on Monday.

Heilongjiang reported 22 new confirmed patients on Monday, 13 of whom are from the province's capital of Harbin, bringing the total to 515 cases. The local health commission said that all of the cases were found during centralized quarantine or large-scale COVID-19 screening, and all close contacts have been found and are under clinical observation.

Another province in Northeast China, Jilin, which saw 350 people become infected from the recent outbreak, are also reporting fewer cases, with only four new cases discovered after they were taken into quarantine as a key monitoring group.

Wang Guangfa, a respiratory expert at Peking University First Hospital, said that although double-digit infections are still being reported in the northeastern part of China, it does not indicate that the epidemic situation is worsening.

"On the contrary, as we can see from the epidemiological report, most cases were already put under quarantine before being confirmed, meaning that silent carriers are being controlled without transmitting the virus to crowds," Wang told the Global Times on Monday.