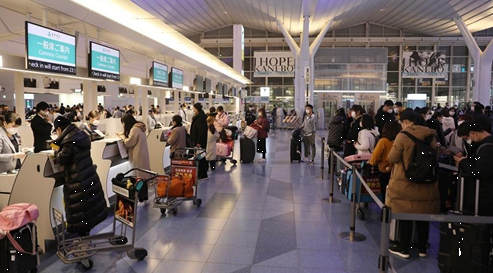 Passengers line up to check in at the airport counter of Spring Airlines at Tokyo International Airport in Tokyo, Japan, Jan. 31, 2020. (Photo: Xinhua)

About 200 overseas Chinese students finally took a designated flight with the Chinese Embassy's help to return to their homeland after being stuck at a transfer point in Ethiopia for two nights, as many international flights to China were cancelled due to the escalating COVID-19 pandemic.

An insider told the Global Times on Monday afternoon on condition of anonymity that a special flight to collect Chinese stuck at Addis Ababa, Ethiopia, under the coordination of China's Embassy in Ethiopia, left for Shanghai with about 200 passengers on board.

According to several overseas Chinese students stuck in Ethiopia reached by the Global Times, the Ethiopian airport held up China-bound flights from foreign countries such as the US, the UK and Italy after the Civil Aviation Administration of China (CAAC) reduced the number of international flights in the face of continuous imported COVID-19 cases.

A Chinese woman studying in the US told the Global Times on Monday morning that she flew from the US on Thursday to China's Guangzhou via Ethiopia. However, she stayed in Ethiopia for more than one day after arriving at the transfer airport on Saturday and the flight was cancelled. Another flight to Shanghai, which she later changed to, was also cancelled.

She said they were very anxious as their facial masks and other protective kits almost ran out.

The Ethiopian Bole International Airport is a popular transfer point for Chinese passengers from abroad, and China's Guangdong, Sichuan and Shanxi provinces have reported imported COVID-19 cases transferred via Ethiopia.

Because the epidemic in many Western countries including the US has worsened, classes were suspended and students were requested to move out of their dormitories. Many Chinese students decided to return to China where the outbreak has been basically brought under control.

An official of the CAAC said at a press conference on Monday that the administration has noticed the demand by overseas Chinese to return home and it is able to operate temporary extra flights and charter flights in a timely manner to collect Chinese nationals from abroad considering the destinations' capacity.

"The number of imported cases has been in double digits for several consecutive days, which undoubtedly brings challenges to the domestic epidemic prevention and control, resumption of production and work, and people's lives and health. In such a situation, the country must take more decisive and effective measures to curb the high risk of imported infections," official said.

The CAAC announced on Thursday that each foreign airline may keep only one route to China with no more than one weekly flight to contain the increasing risks of imported COVID-19 cases.