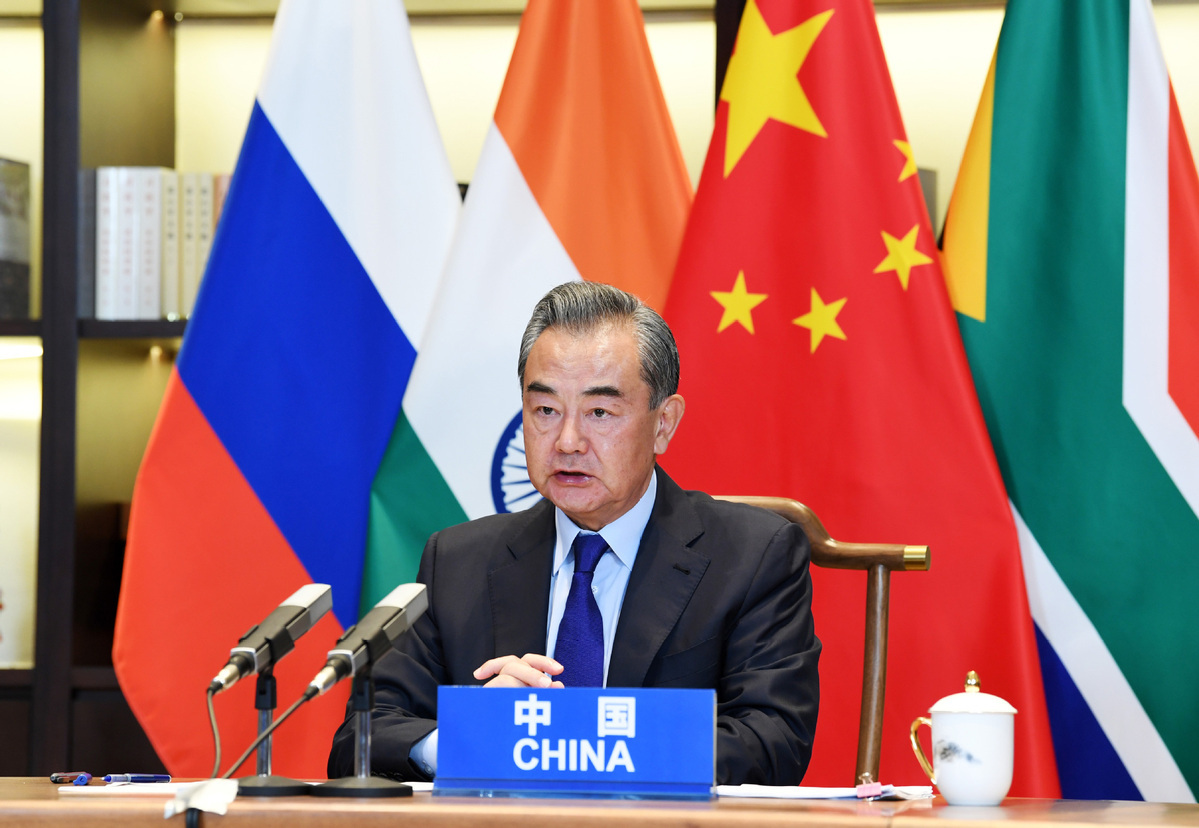 State Councilor and Foreign Minister Wang Yi has called for BRICS countries to jointly promote global solidarity to fight the pandemic and reject Western attempts to politicize or label the virus as a way to smear targeted nations.

Wang made the remarks on Tuesday during a virtual meeting of the foreign ministers of the BRICS countries－namely, Brazil, Russia, India, China and South Africa.

This year marks the 20th anniversary of putting forward the concept of the BRICS countries and the 15th anniversary of the establishment of the meeting mechanism of BRICS foreign ministers.

The rise in infections in the southern hemisphere and their decline in the northern hemisphere is partly a result of vaccine hoarding and export controls by a handful of developed countries, Wang said.

However, he said, BRICS members are trying their best to provide other countries with vaccines while also vaccinating their own citizens, which is in sharp contrast with the "domestic priority" approach.

Noting that China has provided over 350 million doses of COVID-19 vaccines to the international community, Wang said he hopes the BRICS nations will continue to make vaccines global public goods, adhere to the principle of fair and reasonable distribution and support the World Health Organization in accelerating the implementation of COVAX program－which distributes vaccines to developing nations, and support the World Trade Organization in making an early decision on an IPR waiver for COVID-19 vaccines.

He said it is necessary to accelerate the construction of the BRICS vaccine research and development center, support domestic vaccine companies' transfer of technology to other developing countries, carry out cooperative production and help eliminate the "vaccine divide".

The so-called rules formulated by a few countries should not be allowed to replace international laws that are universally recognized, he said.

After the meeting, the foreign ministers released a joint statement on strengthening and reforming the multilateral system to make it more resilient, efficient, effective, transparent and representative.

Reaffirming their commitment to multilateralism and noninterference, the ministers called for building a more fair, just, inclusive, equal and representative multipolar international system.

The ministers also agreed that reform of the multilateral system should promote the deeper participation of developing countries and least-developed countries, especially African countries, in global decision-making processes, and bring global governance in line with reality.

With major changes and a pandemic unseen in a century, the meeting demonstrated the resilience and vitality of BRICS cooperation, Foreign Ministry spokesman Wang Wenbin said at a daily news conference on Wednesday, adding that China will work with its BRICS partners to make contributions to global and regional peace and development.