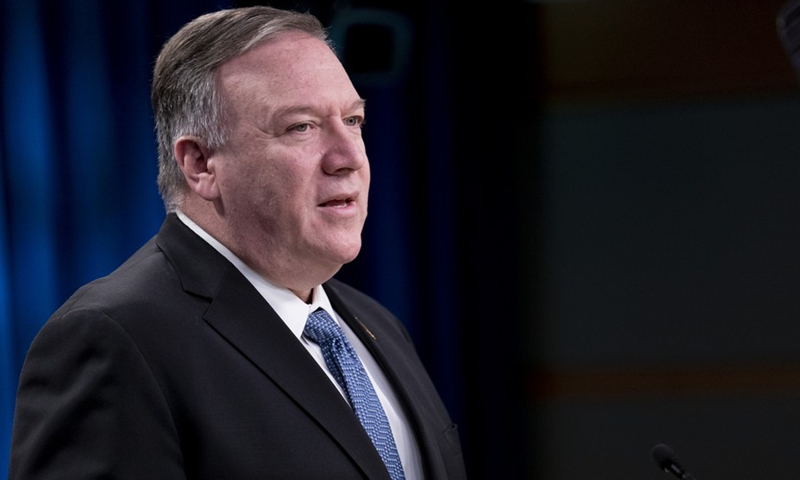 US Secretary of State Mike Pompeo speaks during a press briefing in Washington, D.C., the United States, on March 5, 2020. (Photo: Xinhua)

Actions speak louder than words and the truth will always turn out to be true, said Chinese Foreign Ministry spokesperson Hua Chunying on Thursday in response to US Secretary of State Mike Pompeo's recent statements accusing China of covering up the death toll from its COVID-19 epidemic.

China's significant anti-epidemic achievements  in such a short time is the result of the strong leadership of the Communist Party of China and also the unification of the whole country. Just as what top epidemiologist Zhong Nanshan said on a Tuesday TV program, clarified Hua, "China's achievements in epidemic control can stand the test of history and time."

China has made great progress in post-epidemic work and production resumption, and China-based foreign journalists should all have a deep experience and understanding of it, Hua said.

"The recent Wuhan music festival and Qingdao beer festival that has attracted a lot of attention from foreign media are real and important signs that Chinese people's lives are returning to normal in an orderly way," she said.

Hua also slammed the US for using its old "Attack China Card" as a strategy to shirk its own responsibility and cover up its incapability in tackling the  epidemic situation, noting that their strategy has no factual basis and many US people and even US media are critical of it.

She reiterated the timeline of the epidemic situation in China and the US and the two countries' response to it since the outbreak started, and hit back against the US' blame game on China for the chaos in its current epidemic response.

How could the US, with the most advanced medical technology and abundant resources, become the most severely affected country in the world in just a few months after China cut off all the transmission paths of the epidemic to the world? Hua questioned.

"The blame game may deceive some people for a while, but the ultimate victory of the anti-epidemic battle will only depend on science and respect for life," she said.