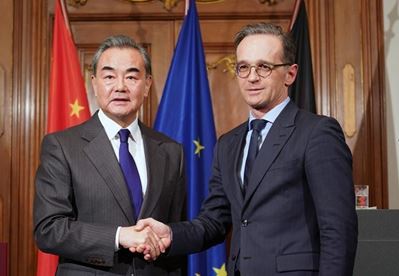 Chinese analysts said on Friday the visit of China's State Councilor and Foreign Minister Wang Yi to Germany, the first overseas trip by a senior Chinese official since the outbreak of the novel coronavirus, will let the world see China's efforts against the virus, boost international confidence in China and stress the significance of international collaboration in tackling a global public health issue, as some countries acted out of political motives to smear China's efforts.

China has the confidence and ability to prevail over the epidemic at an early date, Wang said during the fifth round of the China-Germany Strategic Dialogue on Diplomacy and Security with German Foreign Minister Heiko Maas in Berlin on Thursday.

Except for Hubei Province, the total number of new confirmed cases in other parts of China has been dropping for 10 consecutive days as of Thursday, with the recovery rate continuing to rise.

China's economy has a strong internal driving force, and China will overcome temporary difficulties and strive to realize the economic and social development targets set for this year, Wang said.

Maas indicated that Germany firmly supports China in its fight against the virus and admires the decisive and responsible measures taken by the Chinese government.

Germany opposes any irrational reactions and discriminatory measures against the epidemic and will continue to respond to it objectively and calmly. Germany is ready to continue its support and assistance to China on top of the previous donation of medical supplies, Maas said.

Besides the dialogue, Wang is scheduled to attend the 56th Munich Security Conference (MSC) until Saturday.

A panel discussion on global health security will be held at this year's MSC, and Wang will also deliver a keynote speech to talk about the Chinese government and people's concerted efforts and progress in fighting the epidemic, and on advancing international cooperation against it, China's Foreign Ministry said.

Tedros Adhanom Ghebreyesus, director-general of the World Health Organization, is set to address the panel on the outbreak of the novel coronavirus mostly in China but also in some other countries and regions.

China's response to the coronavirus epidemic has been transparent, sharing information with other countries and international organizations like the WHO, Chinese experts said.

Wang's speech will be conducive to easing the concerns of some countries on China's response to the epidemic and significant to the overall victory of human beings in fighting the virus, Li Haidong, a professor at China Foreign Affairs University, told the Global Times.

Some countries like the US, out of political purposes in strategic competition with China, have been speaking louder than acting in cooperation with China on combating the virus, and using other issues, including Taiwan, to attack the Chinese government's governance, efforts and human rights, Li said.

They are attempting to marginalize China globally, Li said.

"However, the virus does not recognize countries, religions or culture. It's just like the climate issue: If countries do not cooperate, everyone will suffer," Li said.

African countries and Japan, the UK, Germany and Russia have all been providing support or medical aid to China, which shows not only their strong recognition of China's epidemic response but also their confidence in the Chinese government and people's ability to defeat the virus, Li said.

The global public health issue is a cross-culture, cross-race, cross-religion, cross-country issue that all people should work together to tackle, he said.

International society could cooperate with China on developing vaccines and other effective drugs against the virus, clinical treatment of patients as well as other research on the virus, experts said.

Medical institutions and biotech companies in countries including the US, UK and Australia have been researching on vaccines and diagnostic tests.

China and the WHO will form a joint expert team to conduct in-depth discussions and evaluations of the COVID-19 epidemic and containment. The WHO's advance team that arrived in Beijing on Monday is discussing the specific arrangements on the joint mission.

While the US denied entry to foreigners who recently visited China due to the outbreak of the epidemic, ambassadors from many countries, including Nepal, Myanmar, Iran and Pakistan told the Global Times that they acknowledged China's efforts to contain the virus and said there is no need to take excessive measures like barring Chinese people from entering.

Switzerland, South Korea, Japan, Turkey and many other embassies in Beijing have told Global Times of their support for China's fight against the epidemic and they stand with China in this battle.

In an exclusive interview with the Global Times, Iranian Ambassador to China Mohammad Keshavarzzadeh denied a recent Reuters report which said Iran suspended all flights to and from China due to the coronavirus, saying the report is not true.

"Mahan Air has managed to keep its weekly flights to and from China," Keshavarzzadeh said. He said the Chinese Foreign Ministry has held two briefing sessions for diplomatic missions in China which were very informative and effective. "We also appreciate the allocation of a hotline for emergency issues by China's foreign ministry."

Uruguay's Ambassador to China Fernando Lugris told the Global Times in an exclusive interview that the Chinese government and society's effort in coping with COVID-19 are "resolute and deserve admiration." "I have been able to witness the enormous sacrifices undergone by everyone here in Beijing and the rest of the country," he said.