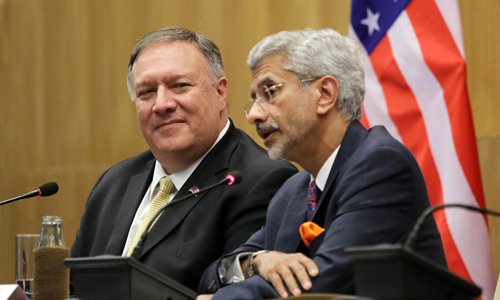 US Secretary of State Mike Pompeo (left) listens as Subrahmanyam Jaishanka, India's foreign minister, speaks during a news conference at the Ministry of Foreign Affairs in New Delhi, India, on Wednesday. (Photo: VCG)

The Chinese Foreign Ministry rebuked aggressive remarks from US Secretary of State Mike Pompeo on the China-proposed Belt and Road Initiative (BRI) during his recent visit to India, and said that no one will buy what he said and his efforts to obstruct BRI cooperation will not work."I don't know what's wrong with Pompeo and he is so obsessed with BRI and smears it anywhere he goes," Chinese Foreign Ministry spokesperson Geng Shuang said Thursday at a news briefing.However, "regretfully, no one buys his smears and attacks on BRI and his efforts to urge other countries to withdraw from the BRI cooperation have proven ineffective," said Geng. "Pompeo really needs to seriously think about why it has turned out this way.""Why has BRI received support from so many countries and international organizations if it was a shackle as Pompeo described? Who else would help those countries to build infrastructure and promote economic development if they do not participate in the BRI? Would it be the US which upholds the 'America First' flag? Will the US offer real money and put forward specific measures?" said Geng. The international community already knew the answers to those questions and "Pompeo himself may have the answers as well," Geng said. "I advice some people in the US to stop telling false stories, which only shame themselves."Pompeo attacked the BRI again on Wednesday during his three-day visit to India amid emerging trade tensions between the US and India.He said that countries in the region have recognized that China's BRI deals "come not with strings attached but shackles," and countries do not wish to develop infrastructure, digital connectivity and energy cooperation at the expense of "relinquishing their sovereignty," Business Standard reported on Thursday.This is the fifth time that China's Foreign Ministry has cited Pompeo and slammed his accusations on China, as Pompeo has repeatedly attacked China on many issues, including China's Xinjiang affairs, Huawei and China's 5G technology.