The US should stop playing boring tricks, Chinese Foreign Ministry Spokesperson Zhao Lijian said Tuesday when asked for comments on tweets by US Special Presidential Envoy for Arms Control Marshall Billingslea that showed China's national flag on the desks for US-Russian military negotiations, which China is not scheduled to attend. 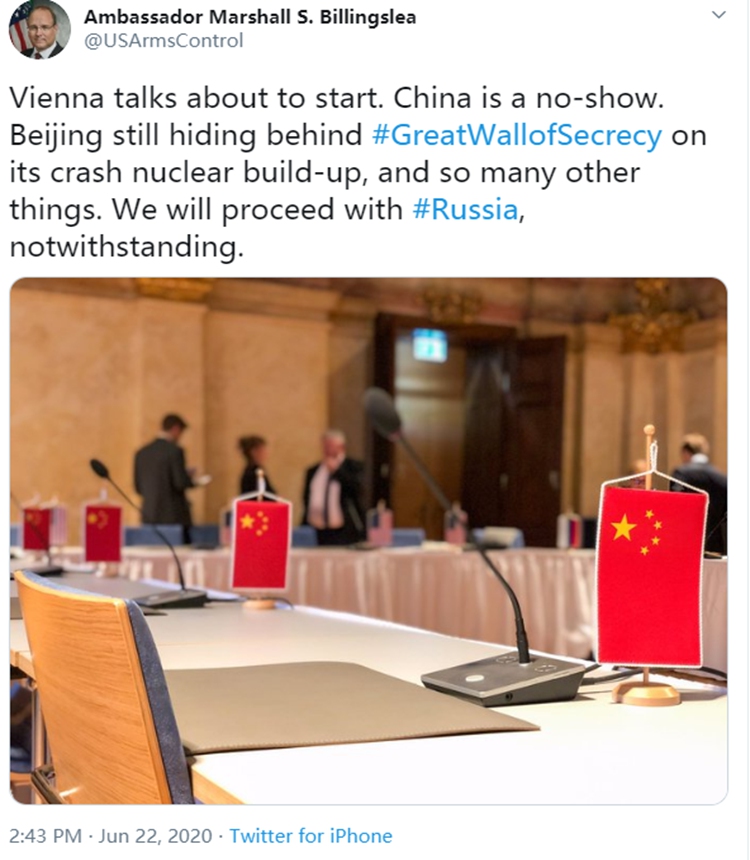 "Vienna talks about to start. China is a no-show. Beijing still hiding behind Great Wall of Secrecy on its crash nuclear build-up, and so many other things. We will proceed with Russia, notwithstanding," Billingslea said in a tweet on Monday.

It is neither serious nor professional for the US to try to draw attention through this method, neither will this behavior leave a good impression on the international community, Zhao said at a routine press conference, noting that China has reiterated its opposition to trilateral negotiations on many occasions.

China urged the US to actively respond to Russia's call to prolong a treaty limiting strategic arsenals, which is also a common expectation from the international community, Zhao said.

He also pointed out that there is an apparent mistake in the Chinese national flag Billingslea posted. "I hope some individuals on the US side will do their homework, and improve their cultural cultivation to avoid exposing themselves to ridicule," Zhao said.

Zhao did not clarify what the mistake is, but the Global Times reporter found that the position of the stars on the flag Billingslea posted is wrong.

Media and observers believed the move was aimed at embarrassing Beijing by posting a photo of Chinese flags and empty chairs for delegates who weren't scheduled to attend talks aimed at rescuing a key nuclear treaty.

US and Russian negotiators held talks on nuclear arms controls on Monday in Vienna.

The talks centered on issues including a possible replacement for the 2010 New Strategic Arms Reduction Treaty (New START), which caps US and Russian deployed strategic nuclear weapons warheads at 1,550 each. The treaty expired in February, according to Reuters.

US President Donald Trump has sought to include China in talks to replace New START and urged Moscow to help bring China into negotiations. But China has refused while Russia accuses the US of seeking to use the issue as a pretext to "bury" the New Start treaty, media reported.

Under the post, Chinese Foreign Ministry Director-General of the Department of Arms Control, Fu Cong, commented, "What an odd scene! Displaying Chinese national flags on a negotiating table without China's consent! Good luck on the extension of the New START! Wonder how LOW you can go?"