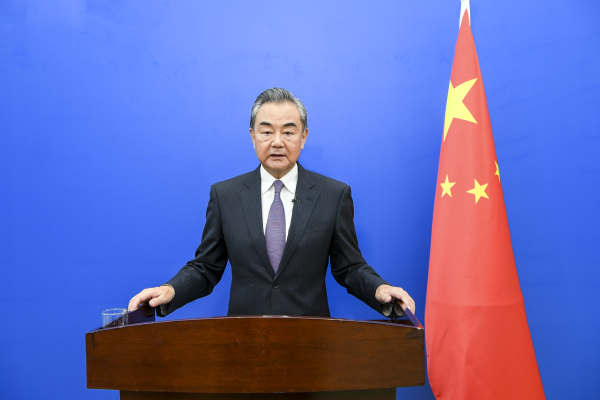 Wang made the remark during his video address to Monday's opening of a symposium held to commemorate the 20th anniversary of the signing of the Declaration on the Conduct of Parties in the South China Sea.

The declaration is the first political document between China and members of the Association of Southeast Asian Nations over the South China Sea issue, and establishes basic principles and norms for them to handle the issue.

Calling for the signatories to go on upholding the declaration's principles and implementing its norms and propositions, Wang said the countries should firmly support all efforts helpful to peaceful settlement and management of disputes, while taking a clear-cut stand against any move made intended to create tension and provoke confrontation.

Peace and stability in the South China Sea is an important prerequisite for regional development, Wang said, adding that China and ASEAN members have guaranteed their development and their peoples' well-being by exercising restraint and bringing their differences and disputes under talks and management as the declaration prescribes.

Countries in the region are the ones that have the final say on the proper management of the South China Sea issue, the senior diplomat also said.

The "dual track" approach China proposed in 2014 accords with the circumstances in the region, and has maintained the overall stability in the South China Sea, providing a good foundation for the joint protection, development and utilization of the South China Sea, Wang said.

The approach advocates friendly consultations between countries involved in the South China Sea issue and joint work by China and ASEAN members to maintain peace and stability in the region.

The declaration reflects the largest common ground of these countries in the region, Wang said, adding that the countries have given up zero-sum mentality, and have always followed the Asian tradition of mutual respect and honoring one's commitment during their implementation of the declaration.