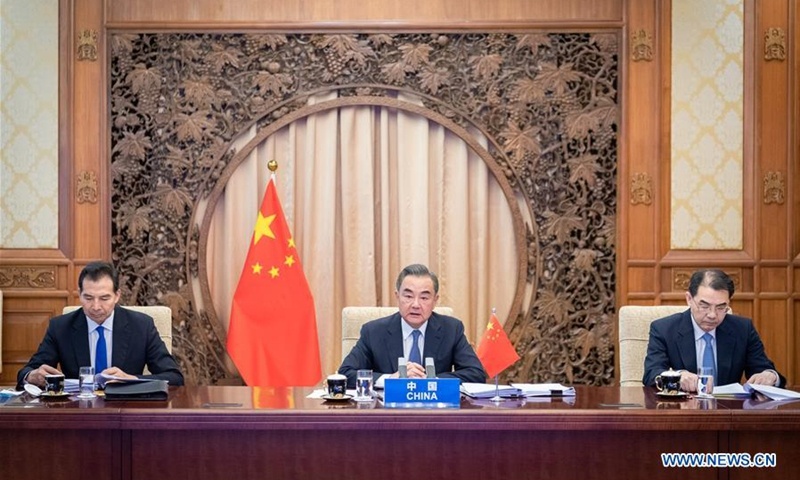 Since the end of August, Chinese State Councilor and Foreign Minister Wang Yi has been busy meeting online or offline with foreign ministers from Europe, Asia and other countries, as observers believe that Wang's intensive dialogues with both European and Asia-Pacific countries show a diversified and active diplomacy and anti-unilateralist stance amid US obstructions.

Besides meeting with the foreign ministers of European countries, Wang also recently attended the foreign ministers' meetings of the Group of 20, BRICS and ASEAN countries, emphasizing the importance of maintaining peace and stability in the South China Sea, strengthening cooperation among ASEAN countries, promoting intra-regional personnel exchanges in the Asia Pacific, and facilitating logistics and cooperation in the field of public health and search for a COVID-19 vaccine.

Wang's intensive diplomatic moves came after US Secretary of State Mike Pompeo's tour to lobby Central and East Europe and smear China and threaten other countries.

Li Haidong, a professor at the Institute of International Relations at the China Foreign Affairs University, told the Global Times on Thursday that part of China's current diplomatic challenges are territorial disputes, but the biggest challenge is unilateralism and an attack from the US in a variety of aspects, including economic, political and ideological fields.

Li's remarks explained the frequent use of "upholding multilateralism," "supporting free trade," and "strengthening cooperation against COVID-19" in Wang's speeches during his visit to European countries - Italy, the Netherlands, Norway, France and Germany - from August 25 to September 1. 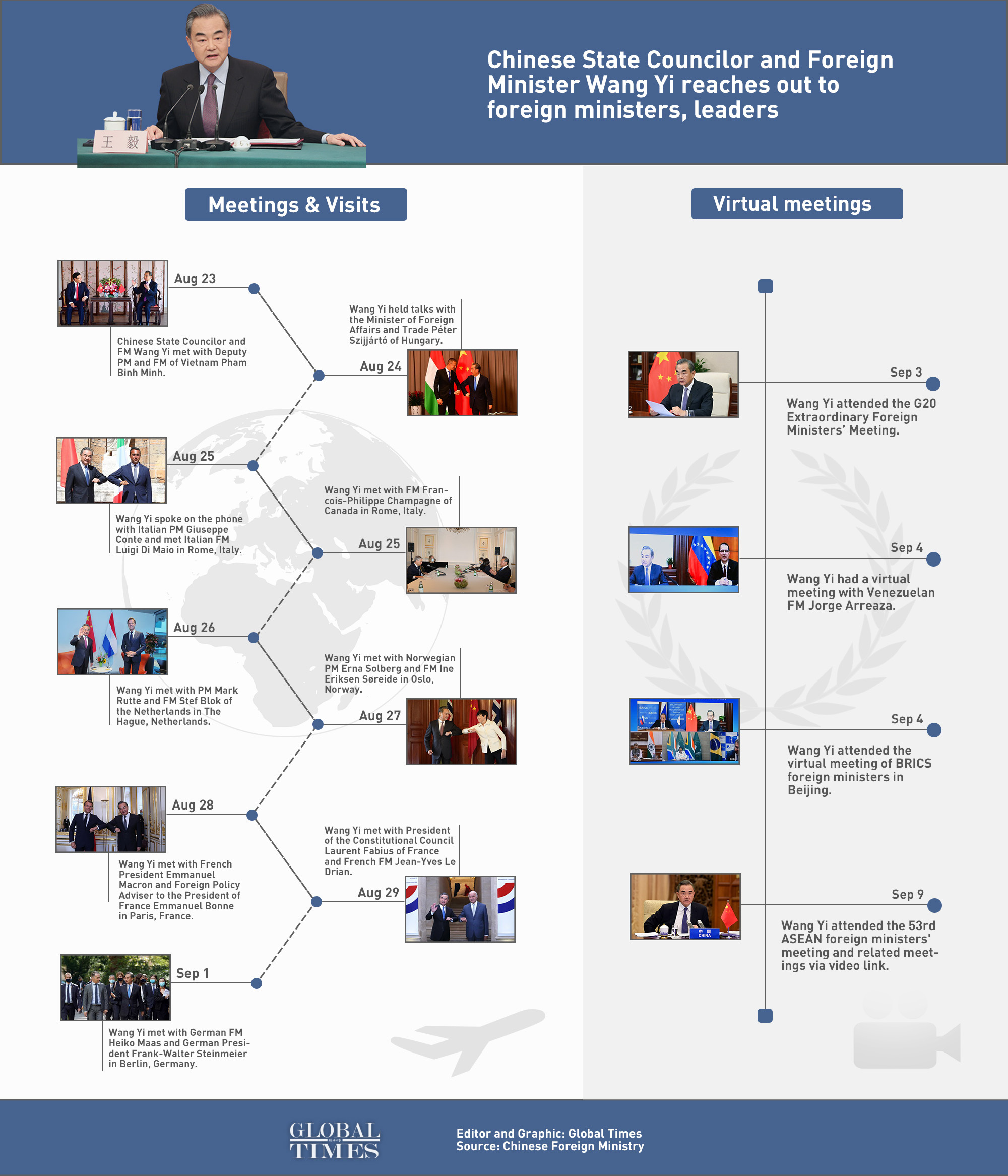 Wang's trip to Italy was his first foreign visit after the COVID-19 outbreak. On August 25, Wang met with Italian Foreign Minister Luigi Di Maio in Rome, saying that mutual assistance between China and Italy has nothing to do with politics.

One day later, Wang met his Canadian counterpart Francois-Philippe Champagne, urging Canada to behave like an independent country on the issue of Huawei CFO Meng Wanzhou.

Wang's diplomatic tour is crucial to breaking through US containment. It also reflects China's multi-dimensional approach to the future, which means China will carry out more active cooperation and exchanges in Eurasia and third-world countries, Li said.

As Wang said, China will be committed to consolidating the world's recognition of multilateralism, maintaining world stability, and opposing unilateralism and hegemonism, which are also in the common interests of the vast majority of countries in the world.

Regular meetings on the world stage made Wang's schedule even busier, and analysts said that participating in the foreign ministers' meetings of the Group of 20, BRICS and ASEAN countries in early September illustrates that China's crucial international status is recognized by most countries.

In Wednesday's video meeting with ASEAN foreign ministers, Wang urged the US to comply with multilateralism, and to proceed with China-US relations in the right way.

Any unilateral move to crack down on other countries in order to defend its monopolistic position is doomed to fail in a world where every member is closely connected, Wang said, calling for regional cooperation in the Asia Pacific.

Wang's diplomatic activities show that China's diplomacy is diversified and can live in harmony with countries with different cultural backgrounds. China's efforts in fighting the epidemic and developing vaccines have contributed to building a community with a shared future for mankind, said Li.

Wang will attend the Meeting of the Council of Ministers of Foreign Affairs of Shanghai Cooperation Organization (SCO) Member States in Russia and visit Russia, Kazakhstan, Kyrgyzstan and Mongolia from Thursday to September 16, the Chinese Foreign Ministry announced on Wednesday.

During the visit, Wang is scheduled to attend a luncheon meeting with the foreign ministers of India and Russia, Zhao Lijian, spokesperson of the Chinese Foreign Ministry, announced.