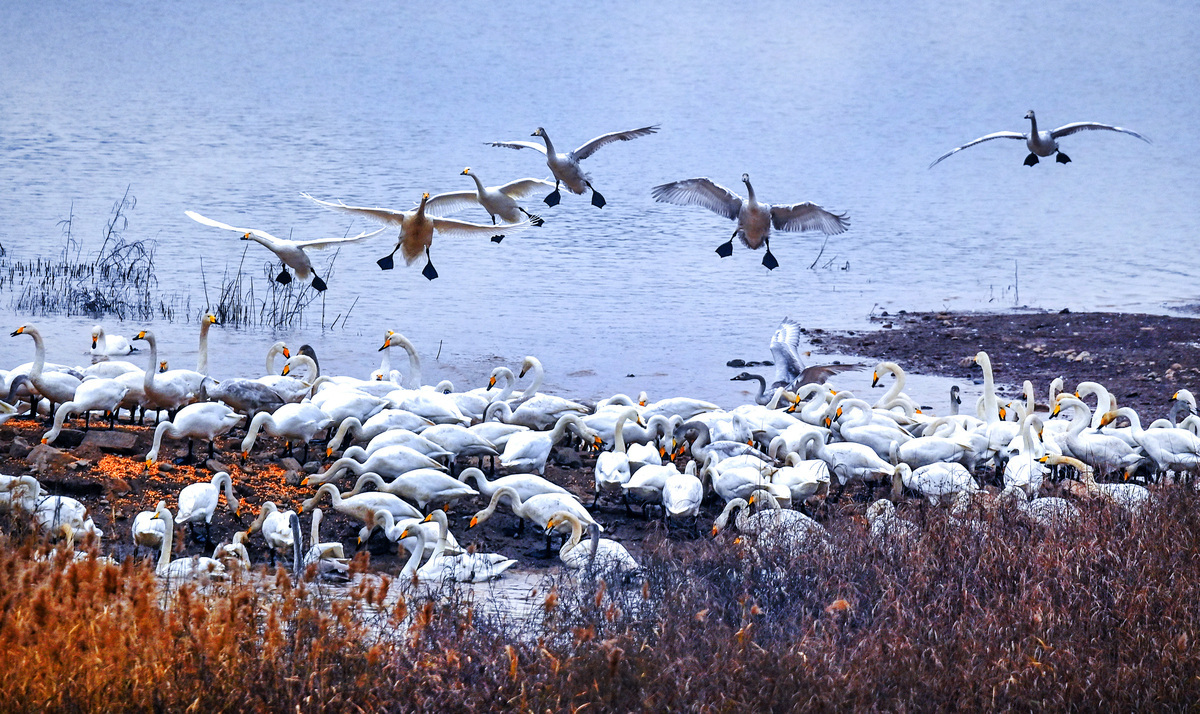 Swans gather at Sanmenxia Swan Lake National Urban Wetland Park in Henan province on Wednesday. The birds migrate from Siberia to Sanmenxia to spend their winters as the city has strengthened ecological protection of wetlands along the Yellow River. (Photo: China Daily)

China will beef up efforts to safeguard the Yellow River by establishing a working mechanism that delivers both ecological protection and high-quality development, a high-level meeting announced.

Presided over by Vice-Premier Han Zheng on Wednesday, the conference of the leading group on promoting ecological conservation alongside high-quality development in the Yellow River basin was attended by officials of the nine provincial regions in the basin and also heads of some central government bodies, including He Lifeng, director of the National Development and Reform Commission, and Finance Minister Liu Kun.

The protection of the Yellow River, known as the cradle of Chinese civilization, is one of the top concerns for the country's leadership. President Xi Jinping has visited the river basin several times during inspection tours to various regions.

"The protection of the Yellow River is critical to the great rejuvenation and sustainable development of the Chinese nation," Xi said on Sept 18, 2019, while chairing a symposium during an inspection tour of Henan province, adding that it is a major national strategy.

As head of the leading group, Han, also a member of the Standing Committee of the Political Bureau of the Communist Party of China Central Committee, stressed that water resources should be seen as a necessary consideration amid urban and industrial development. More efforts should be made to protect and restore ecological systems, focus on improving water quality and step up comprehensive treatment of environmental pollution, he said.

The working mechanism should be improved to forge a strong force to push ecological conservation and high-quality development in the basin, he added.

With its source in Qinghai province, the Yellow River runs through nine provinces and autonomous regions including Shaanxi and Henan before flowing into the Bohai Sea in Shandong province. With only 2 percent of the country's river water content, the 5,464-kilometer waterway serves about 12 percent of China's population, irrigates about 15 percent of arable land and supplies water to more than 60 major cities.

Despite improvements in water quality, water shortages remain a big challenge for economic development in the river basin, said Lian Yu, acting head of the Ministry of Ecology and Environment's bureau that oversees the vitality of the river.

Per capita water resources in the basin are only a fifth of the national level. Environmental infrastructure is a weak link, and wastewater accumulated in the basin has yet to be adequately disposed of and recycled.

Currently, only about half of wastewater generated in the basin's urban areas has been properly disposed of, and only 10 percent of reclaimed water is reused, Lian said.

People's excessive exploitation of water resources still occurs frequently in the basin. "There are outstanding conflicts between the carrying capacity of local resources and the environment vis-a-vis socioeconomic development," he said.

Last year, 73 percent of water in the monitored sections in the basin was classified at Grade III or above in the country's five-tier water quality system, up by 16.7 percent from 2015 levels. Meanwhile, 8.8 percent of the water was worse than Grade V, the poorest quality, down by 8.2 percent from 2015, Lian said.