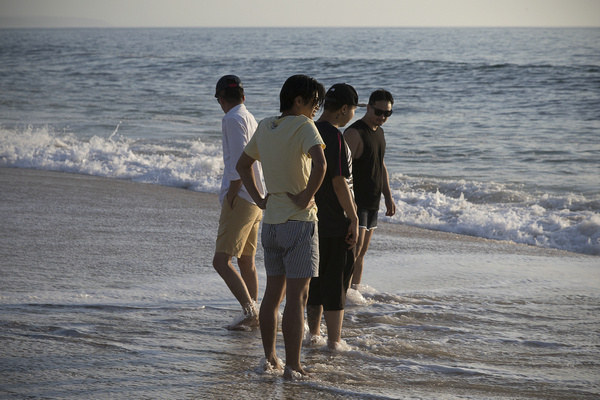 The band of Wutiaoren rests by the beach at Haifeng county, Guangdong province.(Photo: Agencies)

Wutiaoren made a strong first impression when they performed on the reality show, The Big Band, which premiered on streaming service iQiyi on July 25.

Though they didn't make it through to the next round of the competition, Wutiaoren became one of the most unforgettable and talked-about bands since the show's premiere, thanks to its distinctive folk music style, strong local accent and its relaxed, humorous attitude when playing music.

"The moment that the two men walked onto the stage, I was impressed by their red slippers. They were casually dressed and looked confident," says Lin Yufeng, bassist of indie rock band Mosaic, also participating in the show.

"When they started to sing, I was transported. It's as if I could smell the ocean air of their hometown through their music, which is so real and natural."

During the show, the band performed a song in a local Haifeng county dialect, titled Daoshan Liangzai (literally "an underworld dandy"), about a local young man fooling around in a small town.

They had planned to perform another song, but changed their mind the moment they stood on the stage. The result was that the lights, stage set and subtitles, which were all set up beforehand, had to be abandoned.

"Two seconds after I stood on the stage and put my hands on my accordion, I decided to sing Daoshan Liangzai. We often changed our song list during our tours, so the band members were not surprised and followed my lead," says Renke.

Maotao recalls: "I knew that it was risky to change our song at such short notice, because the audience may not understand the lyrics without subtitles, and therefore, may not appreciate it that much. However, sometimes we just follow our feelings. 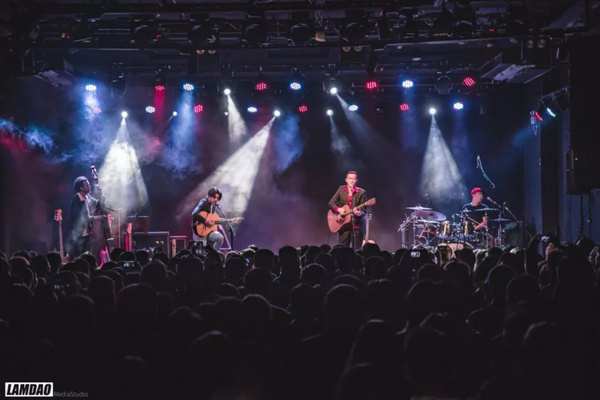 "The moment we started, we felt it was the right song to sing."

Their spontaneous move, despite being considered as "reckless" by the show's production team, touched many fans, many of whom were not familiar with the band, which has a unique, niche style, and their curiosity was aroused.

"Though I couldn't understand the lyrics because they sang in their rare local dialect, I enjoyed the song very much," says Mu Xiaodi, a music lover, who was just introduced to Wutiaoren for the first time through this show."Many lesser-known bands try to stay on the show as long as possible, so that they can get lots of exposure. However, Wutiaoren took the risk of failing to just play its music on the stage. It tugged my heartstrings. So powerful."

Maotao fell in love with rock music during high school. Some 15 years ago, he met Renke, whose family ran a small karaoke bar in a small town in Haifeng county, in 2004 when they both failed at gaokao (the college entrance examination).

The following year they began to sell cassettes and CDs on the streets of Guangzhou, the provincial capital of Guangdong. During their spare time, they started to write their own music.

"We were broke when we first played as a band," Maotao recalls."We used everything that we had as musical instruments, such as plastic trash cans and steamers that were made of stainless steel.

"The humidity in the air, narrow lanes, the small restaurants, hair salons and people around us all became inspirations for our songwriting. We enjoyed our lives even though our living conditions were harsh."

They named their band Wutiaoren because in the beginning there were five members in the band. However, by the time they releasing their debut album, titled Xiancheng Ji, or "small town story", in 2009, only Maotao and Renke remained.

In 2014, Wutiaoren got a contract with Modern Sky, one of the largest indie record labels in China, and started to release more albums and perform on nationwide tours. So far, it has released seven full-length albums.

In 2019, it embarked on its debut European tour, which inspired the band to released its latest album, titled Last Night I Dreamed of Wandering Alone.

Although the quartet failed to make the next stage of the competition, many fans expressed a wish that they could see the band perform again later on the show. And with fans' votes in the later period of the competition, the group may "be reborn on stage". But, before the band appears again, Wutiaoren has provided its music fans with a small entree by releasing a new song, titled The Globes, on July 31, which is also the titular song of－and the first the band has recorded for－their upcoming eighth studio album.