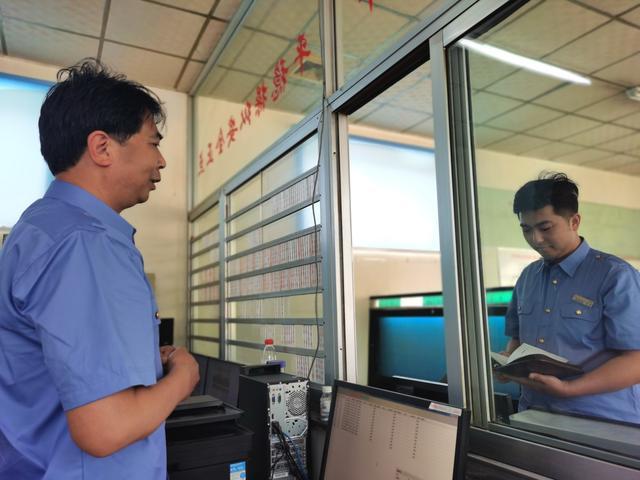 The 31-year-old has been a freight train driver for nine years, transporting cargo between the Tianjin Municipality's Binhai New Area and Tianjin Port. His father, Yang Yongxiang, is a dispatcher and has been working on the railway for about 33 years.

"My father used to be a train driver, too. He has told me a lot about his experience, especially how to tackle tough driving conditions such as foggy and rainy days," said Yang Chen. "Working with my father makes me feel safe and peaceful."

When Yang Chen was a child, his family lived near the tracks. "I liked to watch the trains passing by while imagining my father was driving one of them," he recalled. In young Yang's eyes, his father was a hero to be able to manage such a bulky machine.

As one of the most experienced members of the team, Yang Yongxiang holds a record of zero driving accidents and has a reputation as an expert in detecting mechanical failures. He is often seen underneath locomotives, holding his breath and listening to the sound of the engine.

"I treat the locomotives as my chariots. It is my duty to protect and maintain them and keep them in good condition," said the 56-year-old.

Carrying on his father's passion and expertise, Yang Chen learned quickly in his post. "Some colleagues say I have an innate gift as a train driver, but I know it's because my father has taught me a lot," he said.

As the freight volume at Tianjin Port has been steadily increasing over recent years, the father and son are sometimes unable to meet each other for as long as two months, despite being colleagues at the same station.

But Yang Chen can always get his father's advice over the phone when complicated situations arise. "We cooperate perfectly," said the son.

"We feel sincerely happy about the busy port, as it shows the economy is booming and that we should double our efforts at work," said Yang Yongxiang.

The two sometimes carry out maintenance together and clean gas stains off the bodies of the trains. "New technologies have made such work easier, but I hope to teach my son through action that a person should be able to bear hardships," said the father.

This Father's Day, which falls on June 20, Yang Yongxiang plans to cook an elaborate dinner for his family and have a heart-to-heart talk with his son.

"The best gift I hope to get from my son is his safety and happiness," he said.

"My father has devoted most of his life to his career. I will continue his passion and professionalism and stand out in my ordinary post," said Yang Chen.