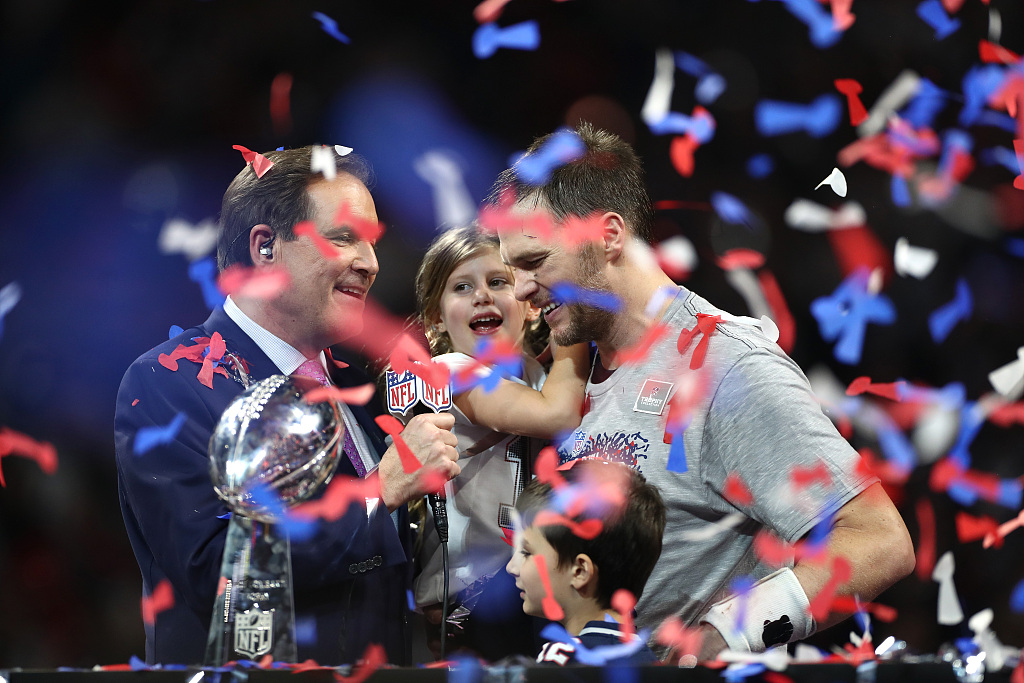 BEIJING, Feb. 4 (Xinhua) -- Chilly temperatures, a 13-hour time difference and the fact that today is Lunar New Year Eve did little to deter many Beijingers from catching the live broadcast of Super Bowl LIII here on Monday morning.

Several area bars were packed with revelers watching the New England Patriots take on the Los Angeles Rams, and for a few long-time residents of this international megacity, watching (what is known in the US as) the ‘big game’ here in the Chinese capital has become a tradition.

“I’ve been coming out to watch the game since 2012, so that's seven years,” said long-time Beijing resident Henry Timberlake. “I’ve noticed that there are more and more places showing it now, and there are more sports bars and more interest from people as the years have gone by,” Timberlake observed.

The Local, a popular bar in the Sanlitun nightlife area in Beijing’s Chaoyang district, was packed with mostly American fans by 7 am local time. Because the commercials are as much a part of the Super Bowl experience as the game itself for most fans, a satellite feed was used to pipe in the live American broadcast of the game.

Taylor Stevens, who works in China as an athletic trainer for Major League Baseball and hails from South Carolina, said it was his first time watching the game in Beijing.

There was also some bad blood toward the Patriots on display, with the majority of fans rooting for the Rams and a few even bringing up New England’s history of cheating.

“I think the Patriots are always going to cheat and win,” said Adam Kennedy-Moore, and entrepreneur from Orange County, California. “I think Tom Brady will get his sixth championship, and all the Rams fans back home will be crying.” He also doubts that Tom Brady’s rumored retirement will ever actually come about. “I think he’s going to play until he dies,” Kennedy-Moore said.

The Patriots did have some loyal representation here, with tech CEO James Fong, who is from the New England state of Connecticut, praising the work that his team has done to get to the top.

“When you are at the top, people are going to knock at you, they are going to pick at it. What’s amazing about the Patriots is the consistency which Belichick and Brady bring to the game. I think they’ve done a tremendous job of elevating the sport, of keeping it very clean and professional. I can’t think of anybody who can do that better than the Patriots,” Fong said.

Fong added that Brady should consider retiring after this edition of the Super Bowl, given all that he is done for the sport.

“If I was him, I would definitely think about retiring,” Fong remarked.

Bostonian Beijing resident Ken Smith, speaking at halftime, noted that “football is a game that contains two halves,” and says that things could change in the second.

“Slow first half, a little sloppy on both sides, but good defense by LA. The Patriots look a little unhinged [due to their] worries about the defensive line of the Rams, which has been stellar,” Smith admitted.

Although American football still has growing to do here in China, the Super Bowl provides a key opportunity for area bar owners to tap into a desire among fans to watch the biggest US sporting event of the year live.

“It’s usually quite well attended. There are more venues showing it now than when we first started, however,” Bermel said.

He also says the breakdown of fans has been fairly consistent from year to year.

“80 percent or more of the crowd is American. Chinese fans are generally less willing to skip work on a Monday to catch the game than their expat counterparts,” Bermel added.

His observation held true this year as well, with almost all of his patrons hailing from outside China. But while the Lunar New Year holiday seems to have preempted Super Bowl LIII, the two events won't always coincide in the future, and with the NFL making serious attempts to tap into the lucrative and growing Chinese sports market, the ‘big game’ will likely see more and more exposure in the world’s most populous country going forward.