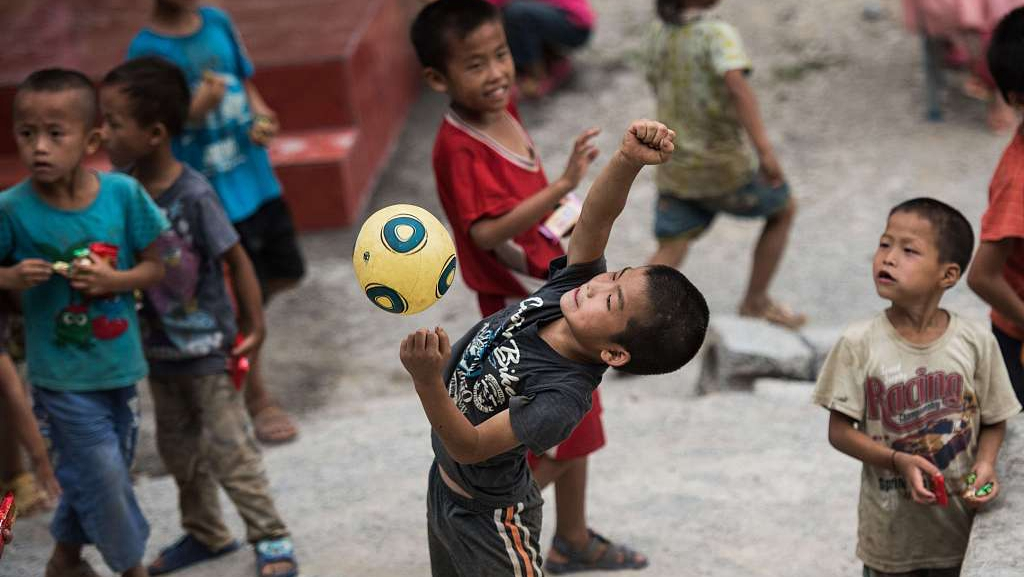 Every morning, Zhang Lili, a high school dropout visits over a dozen homes in Yuele village in northwest China's Gansu Province. She guides rural children deprived of school education, a majority of them left behind by migrant workers, prone to malnutrition and poor mental growth.

Living under extreme poverty, millions of these rural children are dependent on their aging grandparents. Furthermore, a shortage of schools in China's hinterland is also depriving them of primary education.

With only 32 percent of 590,000 villages in the country having a kindergarten school, providing early childhood education has emerged as a major challenge for the government.

Such a massive scarcity of pre-school education leaves around 53 million rural left-behind children (up to the age of six years old) -- nearly the population size of Italy -- susceptible to irreversible stunting and poor cognitive development.

The phenomenon of rural to urban migration has also impacted countries like South Africa with 40 percent, Philippines 27 percent, and Ecuador with 36 percent of left-behind children in the rural hinterland.

“In China, the situation has improved with villages situated in plains and coastal areas increasing the number of pre-schools. However, villages in the mountainous regions have lagged behind,” Lu Mai, secretary general of China Development Research Foundation (CDRF) told CGTN.

The crisis has led to a massive rural-urban education gap, threatening to deprive rural children of equal opportunities in the future.

Zhang, a part of China Reach, a pilot project underway in seven provinces, provides training to both children and their grandparents. “Also, I ensure that the child takes one sachet of nutrition supplements every day,” she said.

While the children in the age group of 0-3 years are taught to develop cognitive skills, grandparents are taught about nutrition, childcare, and parenting. The intervention has helped reduce the anemia rate by nearly five percent, and children are becoming more agile, a study measuring the impact of the CDRF's project found.

Another pilot project, ‘one village, one pre-school' (OVOPS) running in nine provinces ensures construction of educational facilities in each village for children in the age group of 3 to 6 years.

“Our study shows that both interventions have helped rural students perform equivalent to their urban counterparts,” Zhou Xiang, a deputy program manager with CDRF told CGTN.

In a meeting at the Development Research Center of the State Council (DRC) in Beijing on Monday, senior policymakers and government officials pointed out, for sustainable poverty alleviation efforts, it's crucial to invest in rural schools.

“The country has pulled out nearly 740 million families from poverty in the last four decades. Now, we need to develop cost-effective methods to sustain this effort by investing in rural education programs,” Han Jun, deputy director for rural affairs said.

“If the schemes are incorporated at a national level, it will be not only a game changer, but will also provide significant employment,”  Lu adds. The China Reach and OVOP heavily focus on community participation and use local talent to boost rural literacy.

Tapping local talent for rural development helped Zhang get a job in her village after an extended period of unemployment.

The home visit teachers and OVOP scheme increased the school enrollment rate in Ledu district of Qinghai Province from 48 percent in 2009 to 99.6 percent in 2018, Wang Hailian, deputy director of the district said.

“We need to increase their wages, provide more training, and incentives to professionals working in the rural education sector,” Wang added.

Government officials also rued poor participation of the private sector in establishing rural kindergarten schools. In the mountainous regions, villages have a sparse population and difficult terrain, increasing the cost of education per child, they reasoned.

“It's crucial that public funding is made available for rural schools. Other challenges include low retention rate of teachers and a high cost of building schools. We are trying to find a way to resolve the issue,” policymakers attending the meeting said.