BEIJING, Oct. 24 (Xinhua) -- The Pinglu Yellow River Wetland at the junction of Shanxi and Henan provinces welcomed another batch of guests in the latter part of October -- 13 swans that have migrated to spend winter. 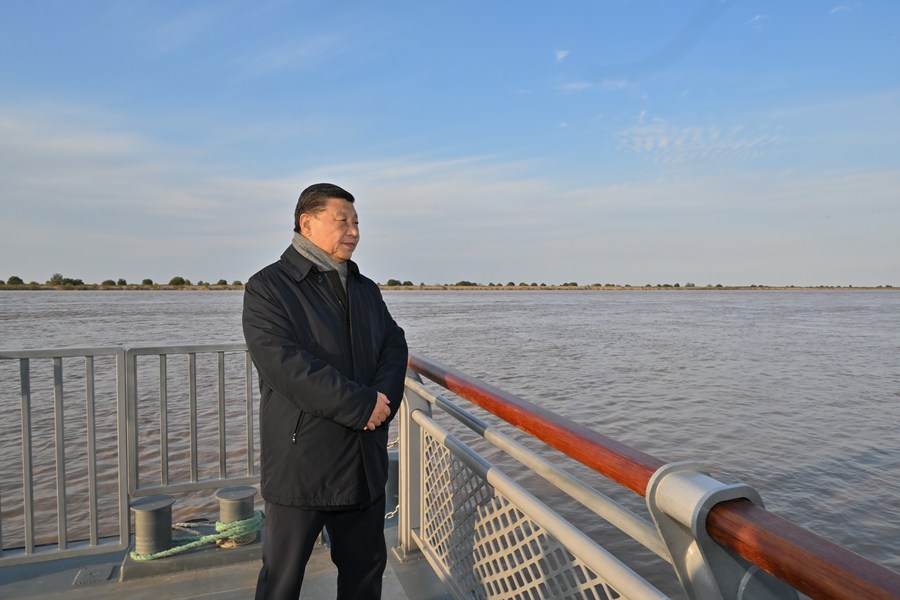 Chinese President Xi Jinping, also general secretary of the Communist Party of China Central Committee and chairman of the Central Military Commission, checks the Yellow River's waterways and learns about the ecological protection and high-quality development of the Yellow River basin at a dock as he inspects the estuary of the Yellow River in the city of Dongying, East China's Shandong Province, Oct. 20, 2021. (Photo: Xinhua/ Li Xueren)

With a pleasant climate and abundant food, the 6,000-hectare wetland is one of China's major winter habitats for white swans, attracting tens of thousands of the birds from Russia's Siberian region.

To better protect the bird, Shanxi's Pinglu County has shut down polluting firms around the wetland and invested hundreds of millions of yuan to improve the surrounding ecological environment. A protection team of more than 100 people has been formed and a remote video surveillance system is in operation. The county government has also spent 400,000 yuan (about $62,640) annually over the past decade compensating residents for returning their farmland to the wetland.

"Besides favorable policies and investment, China's continuous efforts in improving the ecological environment in the Yellow River have contributed most to the migratory white swans," said Zhang Jin, head of the wildlife protection station under Pinglu County's forestry bureau.

The Yellow River is the second longest in China, measuring 5,464 km, and runs through nine provincial regions, including Shanxi, Henan and Shandong.

For more than 3,000 years, the Yellow River basin had been the political, economic, and cultural center of the country. It witnessed the birth of four era-defining inventions in ancient China -- printing techniques, papermaking, gunpowder and the compass. It is also the place where the Book of Songs and other ancient Chinese classics were written.

Today, more than 400 million people live in the basin, which plays a crucial role in the nation's ecological and food supply systems.

Chinese President Xi Jinping, who pays high attention to the protection of the Yellow River, has visited all provincial regions the Yellow River runs through, and has been to river banks on multiple occasions.

"The protection of the Yellow River is critical to the great rejuvenation and sustainable development of the Chinese nation," said Xi, also general secretary of the Communist Party of China Central Committee and chairman of the Central Military Commission, while chairing a symposium on ecological protection and high-quality development of the Yellow River basin in Zhengzhou, provincial capital of Henan in September 2019. 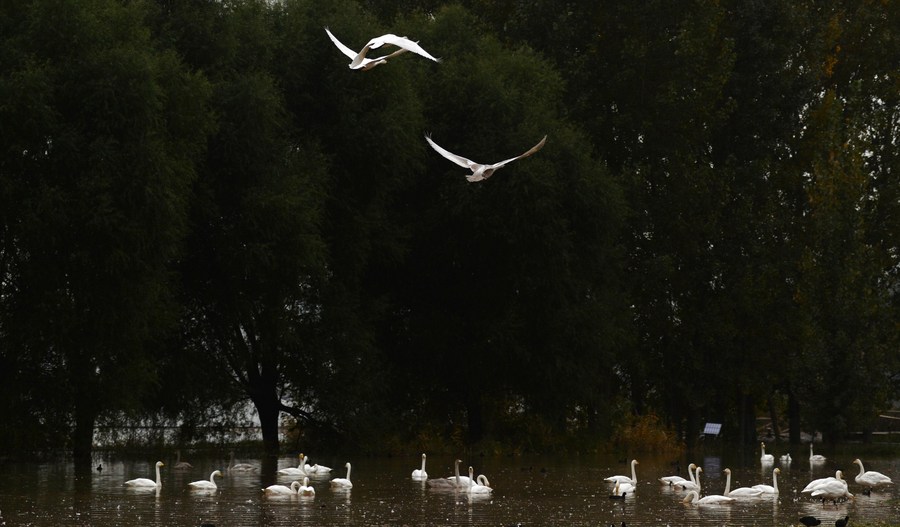 Provincial-level regions along the Yellow River should stick to putting the environment first and being committed to green development, said Xi. He visited the river's estuary and the Yellow River Delta National Nature Reserve in Dongying City, Shandong on Wednesday.

Thanks to wetlands restoration efforts, the number of bird species in the delta nature reserve has doubled from 187 in 1992 to 371 this year. The city has restored over 20,000 hectares of wetlands since 2017 and is building a 108-km-long ecological corridor along the Yellow River, according to Dongying Mayor Chen Bichang.

Measures for high-quality development have also been adopted in provinces and autonomous regions in the Yellow River basin.

In April, the State Council approved a plan to build a start-up area to replace old growth drivers with new ones in Jinan. The area also serves as a demonstration zone in promoting ecological protection and high-quality development of the Yellow River basin.

Covering an area of 798 square km, the start-up area is expected to include future industries such as brain-like artificial intelligence, future network and 4D manufacturing, and realize an output of more than 60 billion yuan in 2025.

High-quality development in the Yellow River basin also facilitates common prosperity. Lishi Village in mountainous Xihaigu, an area in northwest China's Ningxia Hui Autonomous Region, used to be one of China's most impoverished due to drought and a fragile ecology.

Its quality products such as vinegar, oil and flour have been well-received. Last year, the collective economic income of Lishi Village had reached about 640,000 yuan, and dividends had been paid to villagers for three consecutive years.

"A few years ago, I had to do odd jobs in big cities for several months every year. Now, with skills in manual oil press, I can make more than 30,000 yuan a year without having to work elsewhere," said villager Qi Guoxi. "It's more stable and convenient."