As part of efforts to display more cultural relics in the Palace Museum in Beijing, the public will soon have access to Nandaku, or "the Grand Southern Warehouse", as a permanent exhibition hall for royal furniture from the Qing Dynasty (1644-1911), the museum's director, Shan Jixiang, has announced. 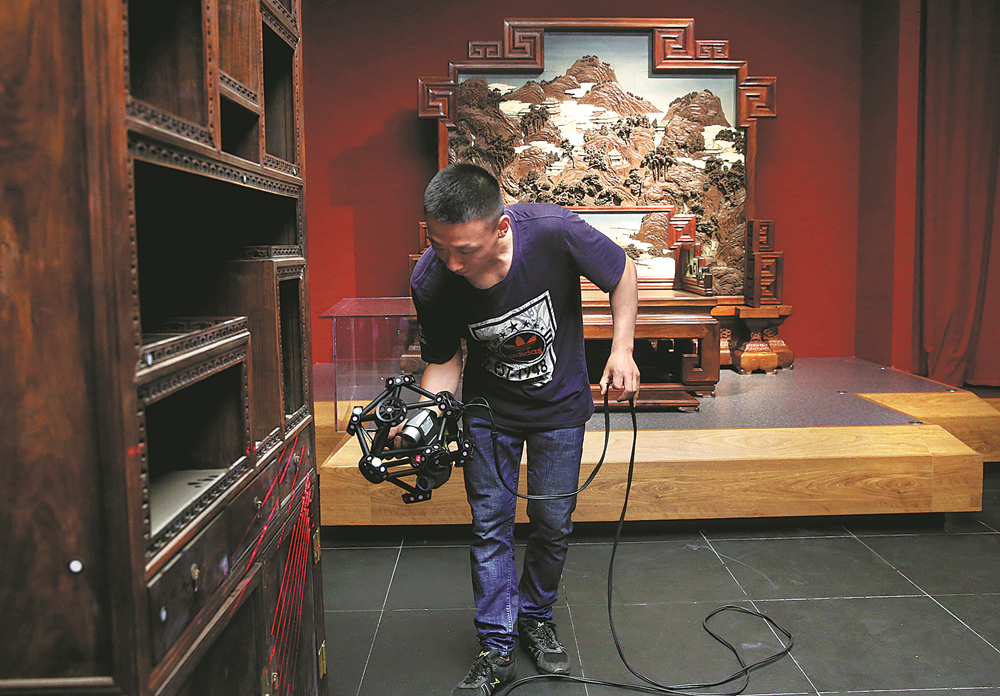 A staff member of the Palace Museum takes measurements of a piece of royal furniture from the Qing Dynasty (1644-1911) on Friday. (Photo: China Daily)

The Palace Museum, also known as the Forbidden City, was China's palace from 1420 to the fall of the monarchy in 1911, and Nandaku was the biggest warehouse in the palace during the imperial years.

According to Shan, around 6,200 pieces of furniture had become scattered in more than 80 halls all over the Forbidden City.

Some were covered with thick dust, he said on Friday. "We decided to give them more respect by giving a specific exhibition for them."

A chair made of deer antlers used by the Qianlong Emperor is among the first rotated artifacts for the upcoming exhibition opening, together with dozens of other exquisite thrones, which were shown during a media visit on Friday.

"The mixture of exhibition hall and warehouse together is unprecedented in our museum," said Wang Ge, the exhibition curator in charge of the project. "This plan will provide opportunities for more furniture to be seen by the public."

He said Nandaku will eventually house more than 2,000 pieces of furniture. Exhibits will be rotated, and about 300 pieces can be seen by visitors during one trip.

Because many of the furniture pieces are large, few have had the opportunity to be moved out of the museum and exhibited elsewhere before, and there was not enough room in the Forbidden City to show them to more people.

A recent survey of the inventory found that 1.86 million artifacts are now housed in the Palace Museum. But Shan says only 2 percent of this huge collection can be displayed at any one time. He said the figure is expected to reach 8 percent by 2020.

Shan now wants more room within the Forbidden City to be used for exhibition of cultural relics.

As many as 13 other institutions used to have offices in the Forbidden City, but now only four are there. Shan said on Friday that the four will move out by 2020.

"We are still making plans with cultural relic administrations on how to use these new spaces," he said.