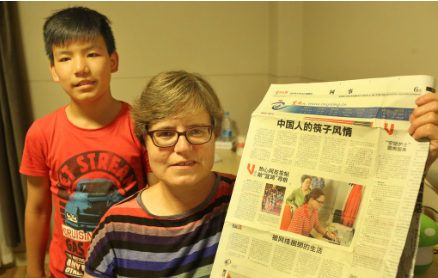 More effort will be made to help children adopted by foreign families explore their Chinese roots, a senior official said on Friday.

That includes easier access to their pre-adoption archives, and arranging meetings with their former caretakers in orphanages, said Ni Chunxia, deputy-director of the Department of Social Affairs of the Ministry of Civil Affairs.

"Local authorities should continue the nonprofit nature of such assistance and try to offer assistance that is more humane, professional and tailored with the aim of helping foster children to grow healthily," she said.

The pledge came after the ministry released a regulation in November aiming to facilitate such endeavors. According to the new rules, which took effect this month, local authorities are not allowed to charge fees for such services.

Instead, they should include the expenses from returnees' visits in their budgets, or cover the expenses using revenue from the public welfare lottery.

According to Ni's office, the public welfare lottery allotted more than 17 million yuan ($2.5 million) between 2011 and 2018 to sponsor about 2,400 children's return trips to China.

"The visits help them know the country better … and deepen their love for the motherland," she said.

Ni spoke at a regular news conference organized by the ministry to explain recent developments in children's welfare.

A total of 97,819 adoptions were registered in China during the five-year period that ended in 2018, and 12.5 percent involved foreign foster families, the ministry said.

Among the 12,238 children adopted overseas, 95 percent have disabilities. The rest were often those who had reached an age at which Chinese families were reluctant to adopt.

The 2018 data show that among the 10.8 percent of adoptions that involved foreign families, more than 97 percent were children with disabilities.

Wang Jinhua, director of the ministry's department of social affairs, who also spoke at the conference, said the figures show that China prioritizes domestic adoptions.

"Overseas adoption has proved to be a wholesome supplement in helping children who failed to find suitable foster families find a home abroad," he said.

An employee with a charity in Beijing that prepares orphans with congenital disabilities for adoption noted a preference for healthy and younger orphans among Chinese foster families. She asked not to be named because she is not authorized to speak publicly.

The greater availability of professional assistance from social workers also makes it easier for them to adopt older children, she added.