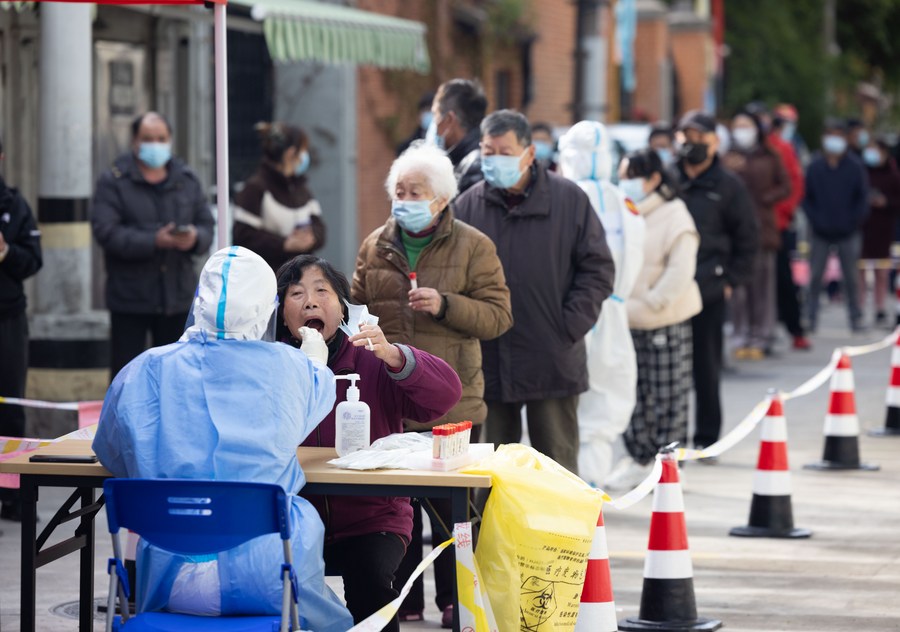 A medical worker takes a swab sample from a woman for nucleic acid test in Changning district of East China's Shanghai, April 1, 2022. [Photo/Xinhua]

SHANGHAI-- Shanghai Friday started its largest round of nucleic acid testing so far amid its efforts to contain the COVID-19 resurgence.

As scheduled, nucleic acid testing will be conducted for 16 million people living in Puxi, or west of the Huangpu River, where 12 districts are under temporary closed-off management.

The megacity, with a population of over 24 million, began on Monday temporary closed-off management in two phases to track infections and curb the spread of the virus.

Mass nucleic acid testing on the east of the Huangpu River started on Monday with the first phase of closed-off management. In four days, over 18 million samples were collected for nucleic acid tests in two rounds of screenings, Wu Jinglei, director of the Shanghai municipal health commission, told a press conference Friday.

Nucleic acid testing started Friday along with the second-phase temporary closed-off management of 12 districts in Puxi.

Community cadres and volunteers are working for smooth nucleic acid testing for residents, said an official with the Bund sub-district in downtown Shanghai. The sub-district is also working to offer specific care to children, the elderly, and sick people and give timely support to enterprises.

To prevent further epidemic spread, the city has tightened its virus control measures and encouraged its residents not to leave the city unless necessary.

Despite a resurgence of COVID-19 infections in parts of China, the Japan External Trade Organization (JETRO) said it remains optimistic about the Chinese market and Japan-China economic cooperation.

The agency will work concertedly to combat the epidemic and hopes that Japanese companies will be able to resume offline operations soon, he said.

He added that JETRO would continue to organize Japanese enterprises to participate in the China International Import Expo in Shanghai this year.

Foreign retailers have also joined the local fight against COVID-19 to ensure supply for daily necessities. Chen Zhiyu, deputy CEO of Metro China, said Metro outlets in Shanghai quadrupled the vegetable supply after doubling the supplier numbers. A Metro store in Pudong has expanded the goods delivery range to 7 km from 5 km.

"We have always had full confidence in the Chinese market and economy, and we are ready to continue to make a greater contribution to fighting the epidemic and ensuring supply and stable prices," Chen said.

Teh-han Chow, CEO of Fonterra Greater China, said the resilience of the Chinese economy in the face of difficulties and the determination and courage of the people of one heart gave the dairy giant confidence in the future of the Chinese market as well as in its further business expansion in China.

Chow said he is confident that China will ultimately win the fight against the COVID-19 resurgence after seeing swift measures taken by local governments to control the spread, guarantee people's livelihoods, and step up support for businesses.

Bruno Chevot, president of Danone Greater China, North Asia and Oceania, said the food company would continue to increase its investment in China, as it is a market worthy of additional investment.

Despite the closed-off management, China's stock and bond markets operated undisrupted this week. The epidemic control measures have also received the understanding and support from foreign financial institutions.

Cai Rong Hua, a manager with Securities Service Operation of Standard Chartered Bank China, said the team has completed tens of thousands of stock clearings and ensured that clients' transactions went undisrupted during the closed-off period.

Sophie Liao, an employee with Citi China, said her team remained optimistic despite the difficult conditions.

The bank's financial market department has arranged two employees for one post to guarantee mutual support through the hard times to offer undisrupted services to clients, said Ji Yang, executive vice president and head of Global Markets of Citi China.