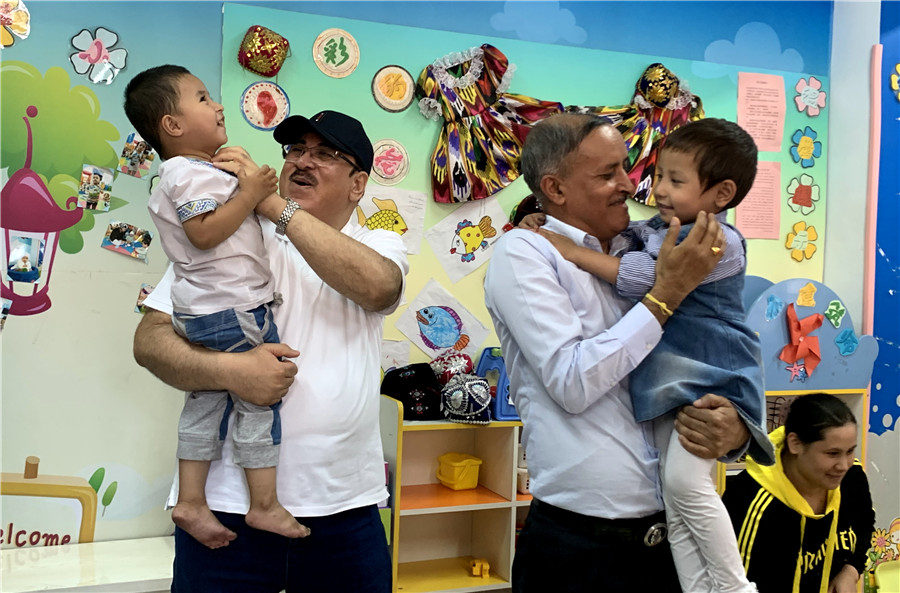 Ambassadors and envoys from seven countries visited the Xinjiang Uygur autonomous region from Aug 19 to 21 at the invitation of the regional government.

The diplomats - from Laos, Cambodia, the Philippines, Nepal, Sri Lanka, Bahrain and Nigeria - visited the cities of Urumqi and Turpan to get a firsthand view of the region's economic and social development.

They gave a positive evaluation of the central government's efforts in promoting local economic development and improving people's livelihoods, safeguarding freedom of religious belief, as well as combating and preventing terrorism in accordance with the law, saying the successful development of Xinjiang has been noteworthy.

Xinjiang is a key battlefield in the fight against terrorism and extremism in China. For a long time, the "three forces" of terrorism, separatism and extremism, both at home and abroad, have plotted and organized thousands of violent terrorist activities, which have gravely damaged the stability, solidarity and progress of Xinjiang, trampling on the basic human rights of the people in the region to life, health, property and development. 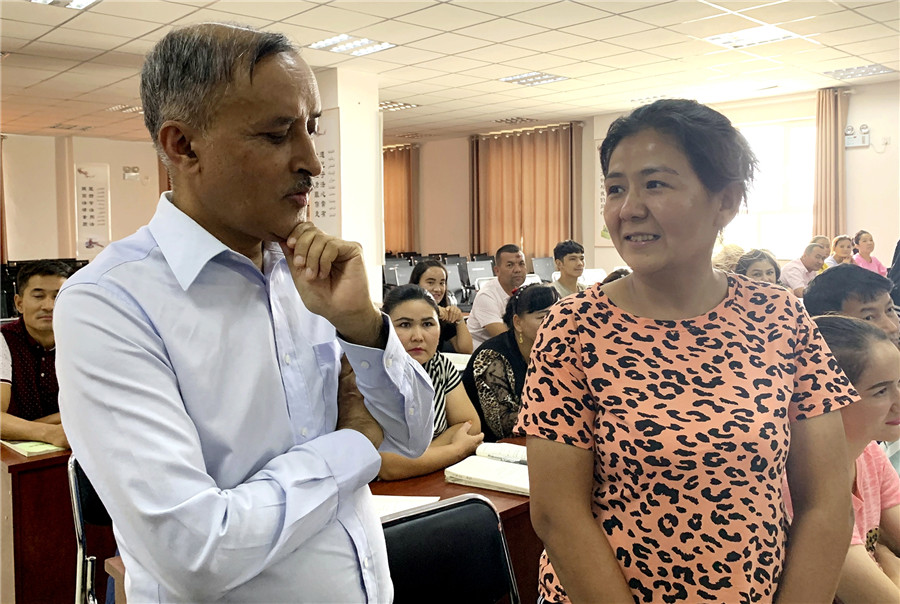 At the Xinjiang International Convention and Exhibition Center in Urumqi, the regional capital, the diplomats watched an exhibition about major cases of terrorism in the region.

Baba Ahmad Jidda, Nigeria's ambassador to China, said his country has suffered a lot from terrorism over the years, with bombings, attacks and arson still frequent occurrences.

"Terrorism and extremism are the common enemies of human civilization. Safeguarding social peace and stability is a shared aspiration of all countries. We should join hands to combat and eliminate the threat of terrorism together," he said.

Noting that the preventive measures against terrorism have yielded good results in Xinjiang, as no violent terrorist activities have been reported in the past three years, the ambassador said: "This is an important and extremely instructive message for us. We hope that our two countries will strengthen exchanges and cooperation and support each other in the field of anti-terrorism in the future."

Last week, the State Council Information Office released a white paper on vocational education and training in Xinjiang, providing a comprehensive and objective description of the program.

Some Western media, however, have distorted the facts and used so-called religious and human rights issues to attack Xinjiang's anti-terrorism efforts. 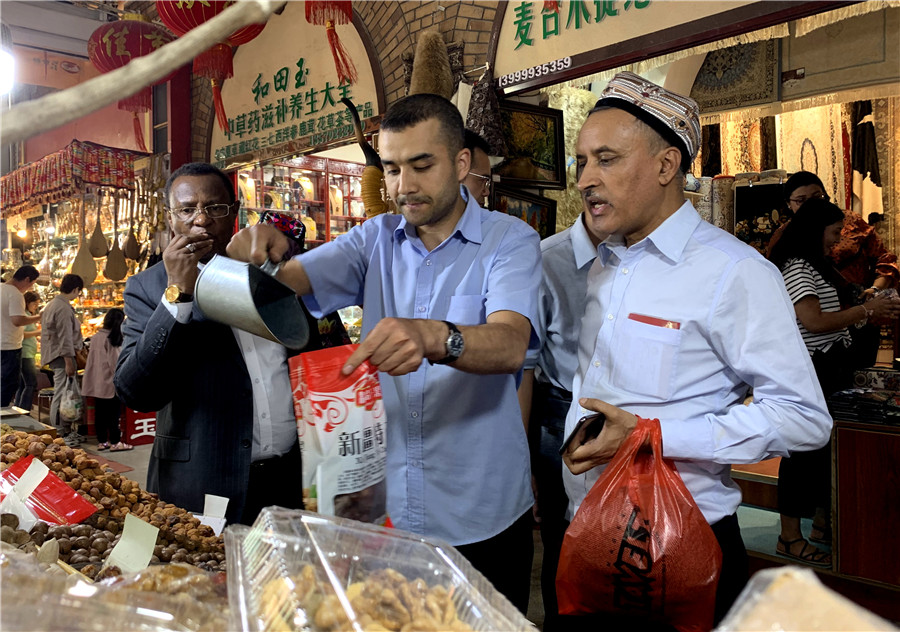 During the diplomats' visit to the Turpan City Vocational Education and Training Center, they attended classes, watched students engage in sports, and asked a large number of teachers and students about the curriculum, accommodations and food, as well as the healthcare situation.

Through the visit and interaction, the diplomats said they had seen the real situation in Xinjiang, which is completely different from what they had read in reports by some Western media. The students are happy, relaxed and upbeat about their future, they said.

"The vocational education and training centers in Xinjiang are not 'concentration camps' as described by some Western media, but schools to help those influenced by extreme thoughts to eliminate the harmful thoughts and learn vocational skills," said Leela Mani Paudyal, Nepal's ambassador to China, during the visit.

"Every student I saw here was happy. They learn not only laws and regulations and standard Chinese, but also professional skills, which I believe will give them an edge to adapt to society after graduation and become strong competitors in the job market," the ambassador said.

Karunasena Kodituwakku, Sri Lanka's ambassador to China, said the education and training centers provide a "platform to eradicate extremism", which is beneficial to the trainees and the stability and development of society as a whole.

"This anti-terrorism example is worthy of study by many countries," he said. 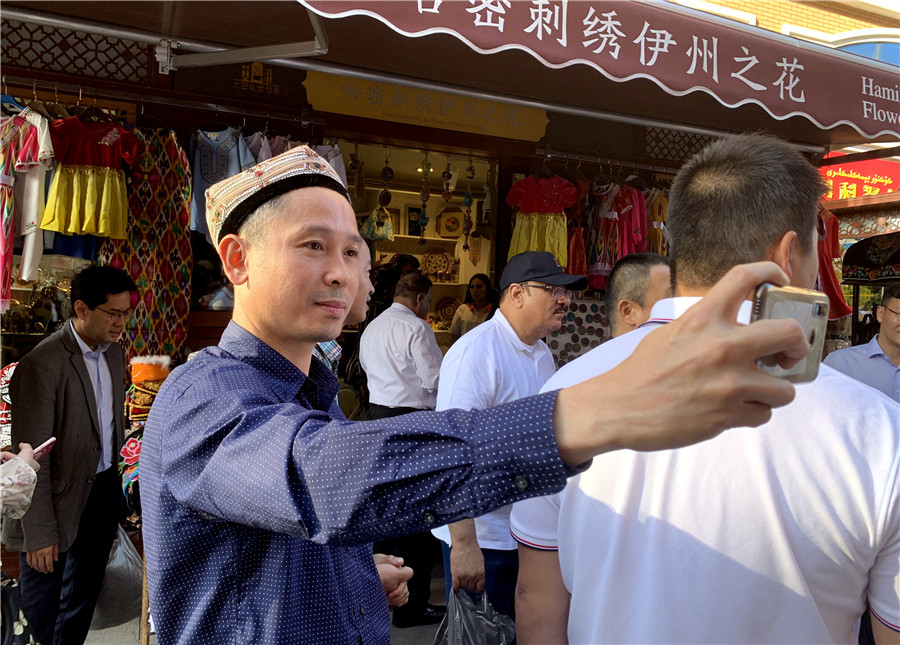 Bounma Thipphonleuang, second secretary at the Lao embassy in China, dons a traditional Uygur hat at the Grand Bazaar in Urumqi on Aug 19.

During the tour, the delegation also visited several religious institutions, including the Xinjiang Islamic Institute in Urumqi and the Kazihan Mosque in Turpan, and inquired about the cultivation of religious personnel and the construction and maintenance of religious places.

The delegation also visited the grand bazaar and local communities, watched music and dance performances and inquired about the progress of China's efforts in poverty reduction and the provision of grassroots services.

In the first half of this year, Xinjiang's tourism industry showed impressive growth, having received 75.9 million visitors, a rise of 46 percent from the same period the previous year. A large part of the tourism boom has been attributed to the sustained and stable development of Xinjiang.

Anwar Alabdulla, the Bahraini ambassador to China, said that about a month ago, Bahrain and many members of the Organization of Islamic Cooperation submitted a letter to the United Nations Human Rights Council to support the Chinese government's efforts to combat terrorism and extremism.

He added that after the tour he would try his best to provide a truthful picture of Xinjiang as a place of beauty, unity and harmony to the world.