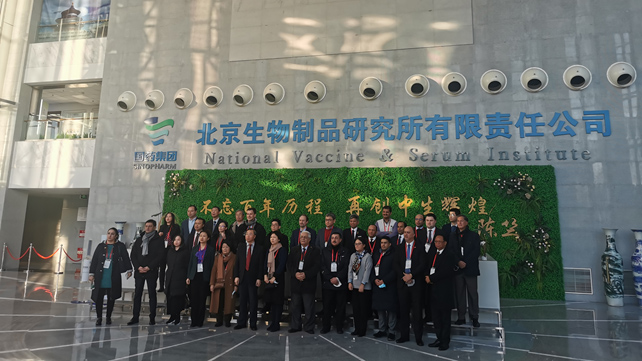 A group of foreign ambassadors and diplomats from 20 countries and world organizations paid a visit on Tuesday to the Beijing facilities of China National Biotec Group (CNBG), which is affiliated with Sinopharm, the leading Chinese vaccine developer.

That comes after Sinopharm filed for its COVID-19 vaccine to get approval for an official rollout across the country. The Middle Eastern nations of Bahrain and the United Arab Emirates (UAE) gave the green light for general use of the vaccine earlier this month.

The diplomats were shown around Sinopharm's vaccine production base and exhibition hall to get a glimpse of the production process and learn more about the results of clinical trials.

"It's of course on the cutting edge of technology in terms of producing COVID-19 vaccine," said Raja Nushirwan Z. A., Malaysian ambassador to China, whose country is in negotiations with China to secure vaccine supplies. "And once these talks are finalized, I'm sure we look forward to receiving these vaccines from China as soon as possible," said the ambassador.

At least 10 countries, with some 60,000 volunteers, have been taking part in late-stage clinical trials for the Sinopharm jab. The UAE has declared it to be 86 percent effective against COVID-19.

"We are very confident that the Sinopharm vaccine will be successful and we heard today that there's no side effects or severe side effects after vaccination," said acting ambassador of the Sri Lankan embassy in China K. K. Yoganaadan. The southern Asian country is also said to be in talks with Chinese companies, including Sinopharm and Sinovac, on efficacy, transportation and other relative issues so as to get vaccines to Sri Lanka.

Some 60 countries have already requested supplies of Sinopharm's COVID-19 vaccine. The pharmaceutical company has announced plans to expand its production capacity to one billion vaccine doses in 2021 that can be distributed under regular storage and transportation conditions.

Liu Jingzhen, chairman of Sinopharm, said the firm will follow Chinese President Xi Jinping's commitment to making any COVID-19 vaccine it develops a "global public good," with the price of the vaccine expected to be lower than it is back home.

The facility visit by foreign diplomats is being seen as a positive signal for stronger cooperation in the global fight against the pandemic. The diplomats said they appreciated China's proposals and efforts in supporting developing countries and multilateralism.

"China surprised us from the first step in dealing with the pandemic. Today, I found China is doing its best producing a good vaccine. This vaccine will be good not only for China, but also for the whole world," said Faris Al-Abidy of the embassy of the Republic of Yemen.

Magnus Jorem, counselor of the Norwegian embassy in Beijing, emphasized the importance for the world – including the scientific communities, the governments and people – to come together in containing the pandemic.

"We are already collaborating in really important ways with China, through GAVI, the vaccine alliance, and through COVAX, and of course multilateral institutions like the WHO. I believe this will only continue and be increasingly important," said the counselor.

"It's not just a question of vaccines," said the Malaysian ambassador to China, pointing out that it is also about shaping the global scenario after COVID-19, including resuscitating global supply chains, trade, and people-to-people connections.