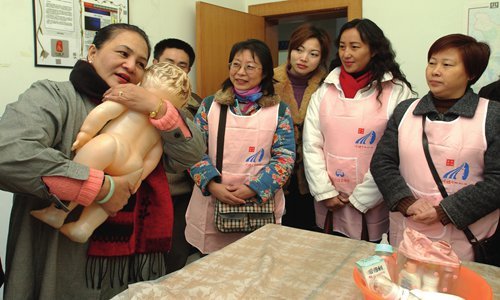 The global spread of the COVID-19 is leaving an oversupply of foreign domestic helpers to the Chinese market at year end, as lots of overseas domestic workers chose to stay in China instead of returning home in the upcoming New Year related holidays, several housework agencies in Beijing and Shanghai told the Global Times Thursday.

Many foreign domestic helpers in China are unemployed and are waiting for a job these days, said an agency in downtown Shanghai, because the number of Chinese families who hire help hasn't grown much this year, the agencies said.

The number of foreign domestic workers, by contrast, increased amid the pandemic as lots of the workers who worried about the COVID-19 situations in their home countries didn't leave China, the agency explained.

"We have lots of Pilipino, Indonesian and Cambodian domestic workers in major Chinese cities including Shanghai, Wuhan and Kunmimg; they can be on the job within a week if there were clients," a staffer with the agency, told the Global Times. She didn't say how many foreign domestic helpers the agency represents.

Filipino domestic helpers, who speak fluent English, are more popular than those from other countries among Chinese clients, the staffer said.

It's not known how many Filipino domestic helpers are in China, as many are underground workers and aren't registered with the Chinese government, she added.

In Beijing, the monthly salary of an unregistered Filipino domestic helper is 8,000 yuan ($1,224.8), similar to that of an officially registered one, said an agency in Shunyi district of Beijing. "But clients have to pay the agency a 30,000 yuan service fee for hiring a registered domestic worker," the agency told the Global Times Thursday.

In China, registered overseas domestic helpers with domestic service related visas are only allowed to work in a few first-tier cities like Beijing and Shanghai, and they are only permitted to serve foreigners and the citizens from China's Hong Kong, Macao and Taiwan regions there, said Fetch Human Recourses, a Shanghai-based Filipino human resources consulting company.

"For Chinese mainland residents, it's risky hiring an unregistered foreign domestic helper who has neither a valid visa nor medical insurance in China," the company's director, surnamed Hu told the Global Times Thursday.

Hiring an underground foreign domestic worker is also illegal, Hu added. "Offenders may be fined or detained for illegal employment."

Hu wasn't sure there is an oversupply in foreign domestic helpers, but many Pilipino domestic workers have lost their jobs amid the pandemic.