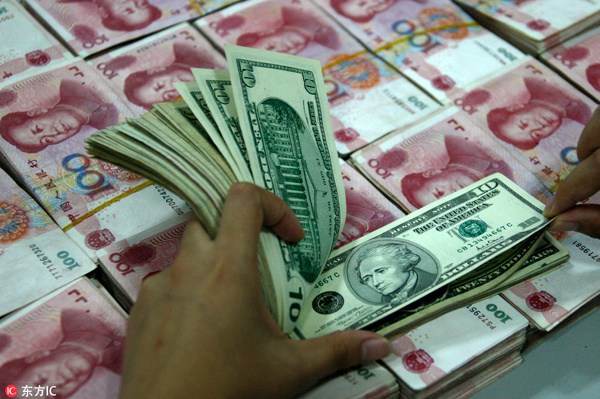 A clerk counts yuan bank notes and US dollar bills at a branch of the Industrial and Commercial Bank of China in Huaibei, East China's Anhui province. (Photo: Agencies)

China reported 5.3 percent GDP growth on a two-year average basis in the first half of the year, up from the first quarter's 5 percent, the National Bureau of Statistics said on Thursday.

The acceleration occurred even as Beijing, ahead of many other governments, has taken measures to wean the economy from stimulus to prevent risks, pointing to robust momentum of recovery.

Seeing that China's second-quarter economic growth remained strong, Standard Chartered Bank revised its GDP growth forecast for China in 2021 to 8.8 percent year-on-year, up from 8 percent, according to China News Service.

Experts said such economic resilience and policy resolve toward greater development quality have brightened global investors' confidence in the long-term prospects of the nation's economy.

According to Pan, a recent Invesco study found that 40 percent of surveyed sovereign funds planned to increase allocation to China over the next five years, drawn by attractive returns and diversification benefits.

Unlike many developed economies like the United States that have launched historic stimulus packages, including direct benefits to households amid the COVID-19 pandemic, China has focused on prudently safeguarding the survival of businesses and has tapered its policy support this year, with a contraction year-on-year in new social financing.

Chen Dong, a senior Asia economist at Pictet Wealth Management, a Swiss firm, said China's prudent approach is likely to be healthier in the long term, as the nation has refrained from piling up debt that could worsen financial conditions.

He added that the Chinese economy is expected to grow 4.6 percent annually on average from 2027 to 2030－still fast given the country's huge economy.

Christophe Donay, Pictet Wealth Management's head of asset allocation and macro research, said such attractive economic growth and growing innovation power have elevated the return prospects of Chinese bonds and stocks, making it sensible for investors to include Chinese asset classes in their portfolios for higher investment returns in the next decade.

Over the past year, global holdings of Chinese stocks and bonds have surged about 40 percent to more than $800 billion, Financial Times reported last week.

BlackRock, the world's largest asset manager, said in a report that China is pursuing a more orthodox policy compared with developed economies and is more willing to tighten macro policy than many other emerging markets, to prioritize the quality of development over the quantity of economic growth.

The standout position has made this a good time to treat China as an investment destination separate from developed and emerging markets, and it supports BlackRock's positive view of Chinese equities and bonds on a strategic basis, the report said.

However, from a shorter perspective, a fine-tuning of policy stance is underway to help sustain economic momentum, as demonstrated by the People's Bank of China's move on Thursday to implement a cut of the reserve requirement ratio for banks to free more funds for loans, experts said. The RRR is the cash amount that financial institutions are required to deposit in the central bank.