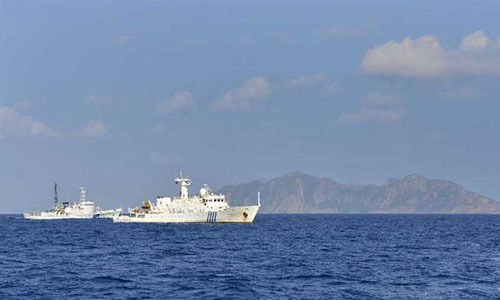 Chinese experts slammed foreign media hype of China's draft coast guard law released on Wednesday, noting that any country has the right to enforce laws in the airspace and waters under its administration.

Foreign media's hype of the latest bill is creating trouble out of nothing and implementing double standards.

A draft coast guard bill was released on the website of the National People's Congress on Wednesday to solicit public opinions until December 3.

The 19th article of the draft empowers the Chinese coast guard to take action, including the use of weapons, when national sovereignty, sovereign rights, and jurisdiction are being illegally infringed upon by foreign organizations or individuals at sea, or facing an imminent danger of illegal infringement.

The draft also clarifies what kind of weapons - hand-held, ship borne or airborne - can be used under different circumstances.

In a report on Thursday, the Japan Times hyped the draft, and said it could target Japanese vessels navigating around the Diaoyu Islands.

Bonnie Glaser, director of the China Power Project at the Center for Strategic and International Studies, retweeted the Japan Times report, and said that "If true, this is quite worrisome. Will lead to increased potential for violence in disputed waters."

US media Stars and Stripes also released a report on the draft on Thursday, noting that "China routinely accuses the United States of infringing on its sovereignty by sending naval vessels through contested waters."

Tian Shichen, vice president of think tank Grandview Institution, told the Global Times on Thursday that every country has the right to carry out law enforcement in waters and airspace under its jurisdiction, including the use of force, as long as the exercise of this power is within the scope of the authorization of international law, or does not violate the international obligations assumed by the country.

He noted that the US and Japanese coast guards do the same thing, but they require laws to clarify law enforcement subjects, weapons used, and law enforcement procedures, which is why China released the draft law.

Another expert who requested anonymity agrees, noting that it is double standard that only China is blamed, while the US and Japan have similar laws.

He explained that the purpose for the coast guard to use force is to put ships seriously violating or disobeying sovereignty under control. As long as the purpose is achieved, the use of force can be terminated. It follows the principle of minimum use of force. He slammed foreign media hype of the draft as trying to create trouble out of nothing.

Tian noted that international law has no specific regulation on the use of force in dealing with disputes on waters, and involved countries would act in line with each country's own laws. "But in practice, countries are very cautious to use force, and involved parties need to figure out the rule of dealing with the disputes via practice, and reach some consensus before completely addressing the disputes," Tian said.

The US violates Chinese sovereignty and security in the name of freedom of navigation, and China has the right to enforce the law. The sovereign country can dispel the violating warship, but cannot use force to strike and sink it, or detain them, according to the UN Convention on the Law of the Sea. But what would happen if the violator does not leave? It should be discussed case by case, Tian explained.

Western speculation on the use of force in China's new law is deliberately hyping the "China threat" theory, Tian said.