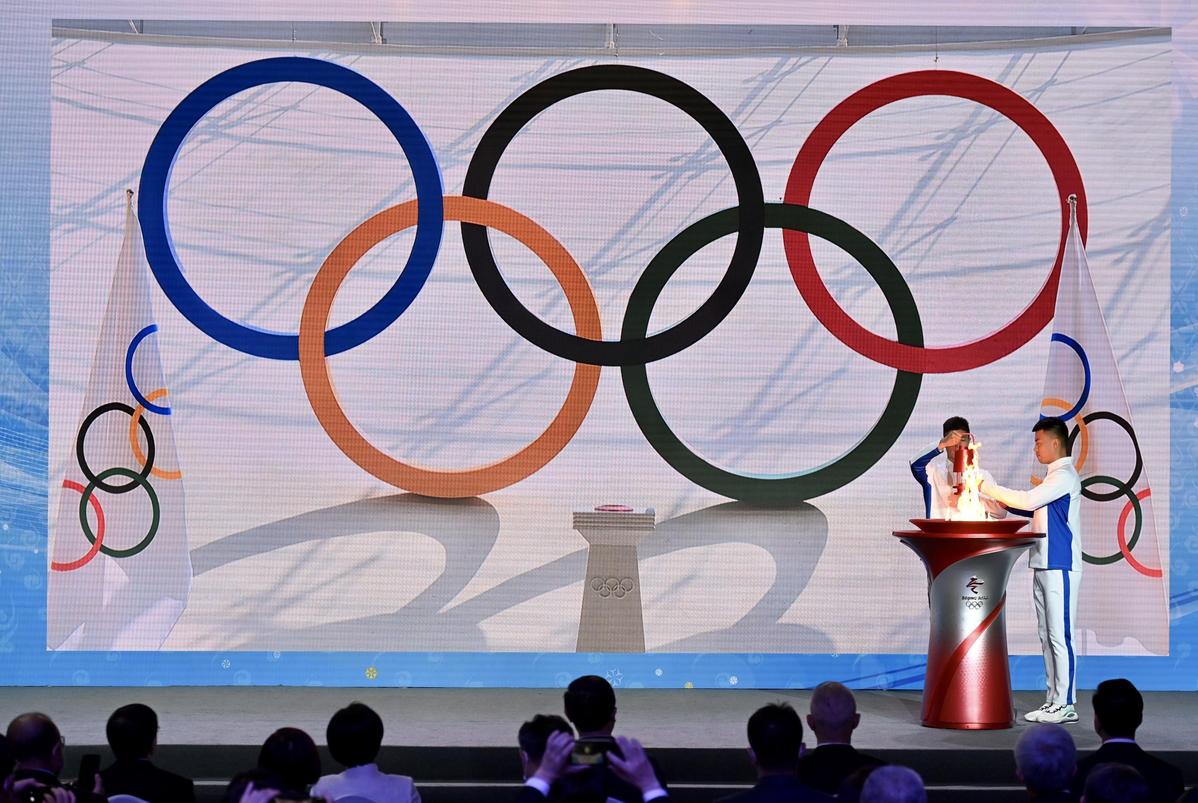 A welcoming ceremony is held for the flame for the Olympic Winter Games at the Olympic Tower in Beijing, capital of China, Oct 20, 2021. (Photo by Wei Xiaohao/ chinadaily.com.cn)

Beijing said on Tuesday it is committed to preparing for the 2022 Winter Olympic Games in an open way and has always welcomed media outlets around the world to come to report on the events.

Dismissing a statement made by the Foreign Correspondents' Club of China claiming that the foreign press has been "stymied" covering events, Foreign Ministry spokesman Wang Wenbin said the statement is not in line with facts, and that China has never recognized the FCCC, which "could in no way represent the true voice of the more than 400 foreign journalists in China".

Press interviews for the Games test events are taking place outside the "closed-loop"－the bubble that athletes have to live in－to ensure the health of all participants and reduce the number of people needing quarantine. Also, only a restricted number of journalists are invited to the interviews due to limited space of the venues, Wang said.

The organizing committee of the test events has "planned carefully "and "overcome huge difficulties" to make management of the closed-loop possible, he said.

The test events began last month and are scheduled to run through the end of December. A closed-loop management system applies to those events as well as those held throughout the Games in February, strictly isolating athletes, staff members and volunteers from the general population.

As to which media outlets are invited to report on the test events, Wang said the principle is to invite international news services recognized by the International Olympic Committee, the IOC's official photo services and some media in countries that have hosted the Games in the past few years, as well as those that will hold them in coming years.

Journalists that are invited can represent the majority of the media, Wang said, adding that the organizing committee will continuously issue newsletters and send information to all overseas media outlets.

"There is no such problem as a lack of information disclosure," Wang said. "Of course, we understand the attention all the media have given to the preparation of the 2022 Winter Games. We also welcome them to take part more in reporting the Games."

Furthermore, to meet the needs of the media, the organizing committee is working actively to put together a series of interviews in the three competition zones－Beijing, its Yanqing district and Zhangjiakou, Hebei province－and will invite mainly foreign media residents in Beijing who didn't participate in the test events, Wang revealed.