While the US and its allies are ramping up efforts in spreading disinformation to label China for "crimes" of "genocide" against ethnic groups in Xinjiang Uygur Autonomous Region, the greater part of the international community does not buy their lies. As Xinjiang organizes more activities to show the world how it protects human rights and prospers, more people overseas stand out to oppose the politization of human rights issues by some Western countries. 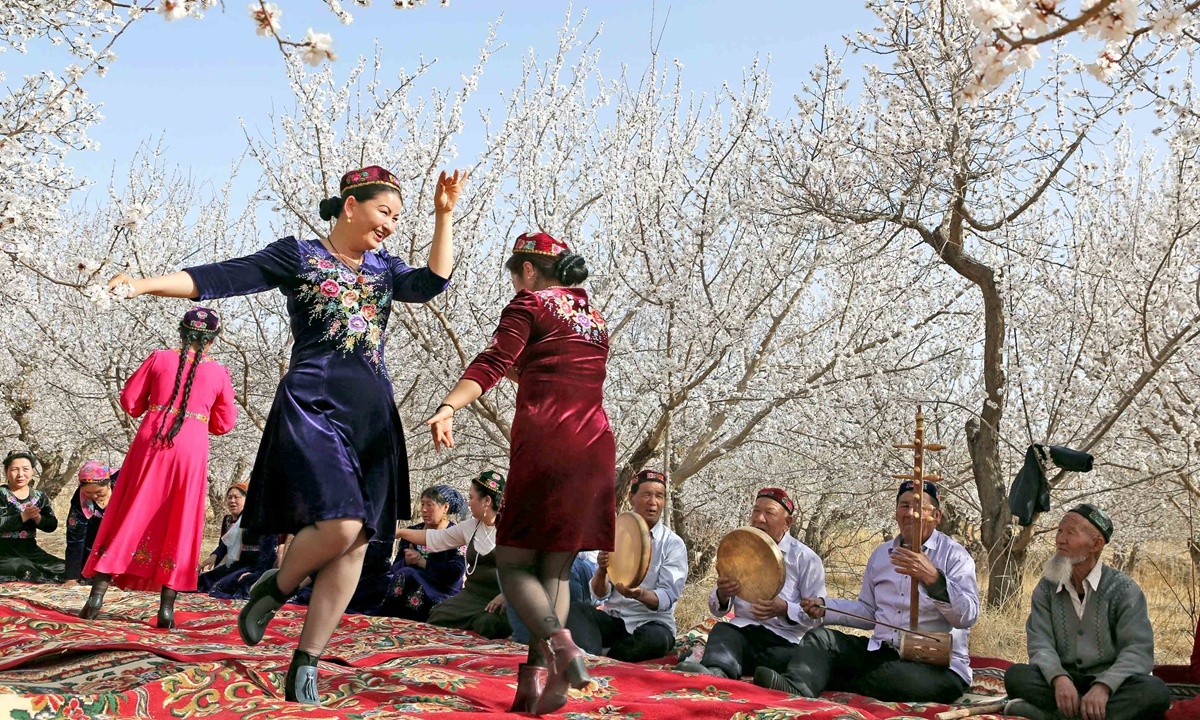 "Untrue", "lies with malicious political purposes", "despicable moves to maintain Western hegemony". These are statements by many leaders of political parties and global experts at an online event held in Urumqi when responding to the US and some Western countries' accusation against China for "committing genocide against Uygur Muslims in Xinjiang".

On Monday, the International Department of the CPC Central Committee (IDCPC) held the briefing in Urumqi to share the CPC governing experience in the region and also to refute disinformation. More than 300 foreign guests, from political parties, international organizations, media outlets and think tanks from 80 countries and regions attended the event via video link.

It is also noticeable that representatives from more than 100 political parties from Islamic countries also attended the online briefing, which showed the Islamic worlds' concerns, understanding and support to China, analysts said.

These foreign guests listened to stories of representatives of Xinjiang residents on how they got rid of poverty by finding jobs in or outside Xinjiang; how residents of different ethnic groups become "family" and help each other in daily life; whether the children have been "forced" to separate from their family and taken to boarding schools. The imam from Id Kah Mosque in Kashi Prefecture also appeared at the event to tell guests how the conditions in his mosque have changed in recent years.

Many leaders of different parties globally also shared their opinions on Xinjiang's developments and the West's accusation against China for "committing genocide" against ethnic minorities in the Xinjiang region.

Turkish Patriotic Party Chairman, Doğu Perinçek. said the claims of "genocide" in the Xinjiang region, are lies made by Western countries and are opposite to the truth.

While the West hypes up the "genocide" of ethnic groups in Xinjiang, the population in the region has been increasing. The so-called "camps" described in Western media actually offer vocational training and education on laws to local residents, Perinçek said.

The Turkish politician said that "forced labor" and "genocide" are conspiracies made by the US and the West for political purposes. "We condemn the deeds of interfering with other countries' domestic affairs and we Turkish people stand with the Chinese people," he said.

Perinçek noted that the US has been found to be involved in terrorist activities in China's Xinjiang and added that Turkey as well as other countries in West Asia have suffered from these terrorist attacks.

The Turkish politician said that he had visited Xinjiang many times and on each occasion was surprised by its fast development.

Back in the 1940s, the Xinjiang region was as poor as many other parts of Central Asia. However, China's Xinjiang region has currently made great achievements while development in other countries is lagging, Perinçek said.

Perinçek noted that during his previous visit to Xinjiang, he noticed that apart from Putonghua, the languages of ethnic minorities are taught in schools and Uygur language TV channels are broadcasted on TV.

The culture and language of ethnic groups have been well preserved in the Xinjiang region, Perinçek said, noting that the Chinese government has set an example to the international community in protecting ethnic minorities.

Absamat Masaliyev, chairman of the Communist Party of Kyrgyzstan, also refuted the "genocide" claim and called it slander against China.

Masaliyev said that the CPC has made efforts to protect Muslims' interests in Xinjiang and the increasing number of mosques in the region is an example of this.

"I want to reiterate that I visited Urumqi and saw the economic development and social stability there… the so-called 'genocide' claim has been made by some countries to interfere with other countries' domestic affairs," Masaliyev said.

Foreign guests also shared their understanding of why the US and some Western countries kept hyping Xinjiang topics and spreading "genocide" lies against China.

Rathindra Kuruwita, a member of the executive committee of the Sri Lanka-China Friendship Association, said that in order to know why Western media is hyping up the "genocide" claims, people need to know their nature. They are tools for the West to ensure their hegemony and repeat fake news and disinformation created by the West.

Kuruwita said, "During Sri Lanka's war against the Liberation Tigers of Tamil Eelam (LTTE) terrorists, some Western media spread lots of rumors against us. LTTE was a brutal terrorist organization that recruited children and introduced suicide bombing to the world. But some Western media institutions carried stories that justified them and spread claims against the government."

"It has been proved that most of the allegations against the government were false but there have been no apologies from the Western media… I feel that this is what they are doing against Xinjiang too. They make false claims and when they are proven to be wrong, they give no apology for these false allegations," Kuruwita said.

The West is attacking China because they don't want to see China rise, and the Chinese government is dealing with extremism, not through "brute force" but through economic development and education. This is in stark contrast to Western nations. China's success would be a refutation of Western policies, which is something the West can't tolerate, Kuruwita said.

Žarko Obradović, Deputy President of the Socialist Party of Serbia, said that the good situation in China's Xinjiang isn't "favorable" for some Western power circles and they are trying to keep the Xinjiang issue "alive and active in order for them to be able to criticize China and depict it in a negative light."

The West's critics are not interested in the people of Xinjiang, or its economic development, social wellbeing, healthcare or poverty alleviations issues. "Because they don't care what is going on and what people can see with their eyes. For them it is only important that criticism exists," Obradović said.

The Monday event was the second online briefing on Xinjiang within one month with the attendance of foreigners, senior officials and residents from Xinjiang. Analysts said that while the West is ramping up efforts in spreading disinformation to defame Xinjiang, the region has become more open and confident in displaying the truth.

While the event was taking place, a small faction of Western countries led by the UK staged another round of disinformation and attacks against China for so-called human rights concerns in Xinjiang.

Britain's foreign secretary, Dominic Raab, denounced on Monday the "torture, forced labor and sterilizations" that he said were taking place against Muslim Uygurs on an "industrial scale" in China's Xinjiang region.

Chinese UN Mission Spokesperson Liu Yuyin has refuted the false remarks from UK foreign secretary and said that human rights should not be used to serve political ends, or as a tool to smear other countries and contain their development.

"The Human Rights Council has no place for lies and deception. To our regret, the UK, Germany, Denmark and Finland and a handful of other countries abused the platform of the high-level segment at the Human Rights Council today to spread false information, smear China and interfere in China's internal affairs. China firmly opposes and categorically rejects their remarks," Liu added.

During the event held in Urumqi on Monday, foreign guests also agreed that there is not one fit-for-all pattern for human rights development and human rights issues should not be politicized to interfere with other countries' domestic affairs.

Tep Ngorn, a member of the Central Standing Committee of the Cambodian People's Party and 2nd Vice President of the Senate, said that some countries with malicious purposes are defaming the CPC's image by hyping Xinjiang related topics, a move that is despicable and should be firmly opposed.

Politicians from Cambodia, Pakistan, Tonga and many developing countries also expressed their opposition for double standards on human rights or attacking or slandering certain country by malicious spreading disinformation.