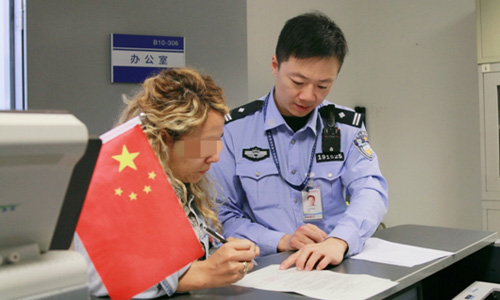 A foreign tourist who illegally overstayed in Shanghai upon visa expiry boarded her flight successfully with the help of an entry-exit police officer on Wednesday, just one minute before the gate's closure.

The woman, who goes by the name Tasiia, arrived at the Pudong International Airport on Monday with a 24-hour visa-free transit permit. Her original plan was to spend one day in Shanghai and then fly to Southeast Asia. However, she didn't leave the city on time as expected.

Intrigued by the cityscape and warm atmosphere during the ongoing second China International Import Expo CIIE in Shanghai, Tasiia decided at the spur of the moment - to stay one more day. She rescheduled her flight, unaware of the stipulated 24-hour time limit, thus breached the visa-free transit policy.

She didn't check-in her for her scheduled flight after arriving at the airport, until she feasted herself with some Chinese cuisine.

It's a typical visa expiry case. According to local regulations, offenders can leave the country only after they serve administrative punishment.

By the time, she summed-up the legal process relating to her offense, only 15 minutes left until the final boarding. All thanks to Yan, the entry-exit police officer, who intervened at the right time to help her get through. He took her through the immigration inspection and security check immediately and rushed her to the satellite terminal by the express train at the airport.

The two rushed toward the boarding gate and arrived one minute before the gate closed. Tasiia regretted her negligence and extended her gratitude to Yan at the boarding gate. "I will come to Shanghai again, with a valid visa," she said.